I love college football. Other than the Super Bowl, I could care less what happens in the NFL. I'll take marching bands, cheerleaders, tradition and heated rivalries over the boring, staid No Fun League any day of the week (and twice on Saturday).

The Texas Longhorns used to have three bitter rivalry games a year: Oklahoma, Arkansas and Texas A & M. Then the Hogs decided to run east with their tails between their legs so they could get throttled by Alabama, LSU and Florida year after year.

Crazy things happen with rivalries.  Downtown Dallas turns into a war zone every October when the Longhorns and Sooners tee it up at the Cotton Bowl. The Longhorns' mascot, Bevo, got his nickname after a bunch of Aggies branded him with the score of the game one year (13-0). 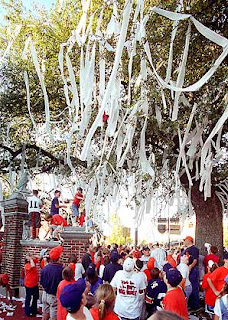 But out in Alabama, things got out of hand. A Crimson Tide supporter was arrested for poisoning the 130 year old Oak Trees at Toomer's Corner outside Jordan-Hare Stadium on the Auburn campus. For the past 40 years, Tiger fans have wrapped the oaks whenever Auburn nets a big win. That tradition may soon be coming to an end thanks to 62 year old Alabama fan, Harvey Updyke. Mr. Updyke called into a radio show and announced that he had poisoned the trees. He ended his call with "Roll damn Tide."

I'm not blaming what happened on Alabama fans. I have no dog in that fight. Rivalries can be fun. Most folks get it and understand that there's no actual hatred involved. It's all about the laundry. My team wears this color and they wear that color. There's no better example of what it's all about than 1999 when twelve students at Texas A & M were killed when the bonfire collapsed during construction. There was no hatred that day - just a friendly rivalry. The Longhorn band played a tribute to the fallen students and a somber mood carried the day. Everyone got it.

Alabama fans get it, too. Crimson Tide fans have raised over $38,000 toward trying to save the trees.

Mr. Updyke doesn't get it. I wonder if he even went to Alabama.
Posted by Paul B. Kennedy at 9:00 AM