Captains (not so) courageous 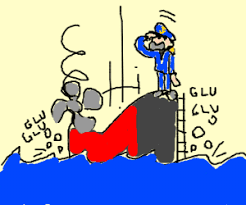 Let me just say it now, politicians, by and large, are not the most courageous folks out there. In fact they are pretty downright cowardly because they are too scared of pissing off small groups of voters.

It's only once a politician decides (or, as you will see later, has it decided for them) to leave public office that they regain the ability to speak what they believe. We've seen it with Republican congressmen who wouldn't criticize Donald Trump until after they announced their retirement from office.

In Harris County right wing political organizations in the northwestern part of the county seem to rule the roost when it comes to primary elections. These groups publish "slates" of candidates for their wingnut readers to vote for. Most of these groups put their endorsement for sale to the highest bidder. Others "sell" their endorsement to the candidate that toes their line.

These newsletter endorsements are important for any budding Republican officeholder in Harris County since very few folks in the electorate have the slightest idea who any of the judicial candidates are - and most don't care so long as they have an R after their name on the ballot.

Jay Karahan has been the judge of Harris County Criminal Court at Law No. 8 since 2003. As a result of this month's primary election, he will no longer be a judge come January 1. Over the past 16 years he has been involved in primary and general electoral politics in Harris County. He knows how the game is played. And not once in the past 16 years has he stood up and complained about the way the Republicans decide who will represent them in the general election.

At least not until now.

In his guest column in Big Jolly Times (a local wingnut blog), Judge Karahan goes off on the backroom politics that determine who gets endorsed and who doesn't. He states in his piece that he wrote it long before he lost his primary election, but it never saw the light of day until after the smoke had cleared.

There is much merit in what he has to say and there is much to criticize about kingmakers who demand that judicial candidates kowtow to their right wing views instead of following the law. But why are we only seeing this after Judge Karahan has been retired by the wealthy whites up in the northwestern suburbs of Houston?

The outrage he feels is real, but it comes across as sour grapes after a defeat.

And now we have the story going around that Gov. Greg Abbott was opposed to the bathroom bill that wingut Republicans were pushing during the last legislative session. Funny how the guv'nor never came out and said he was against the bill. You see, that would have taken courage. That would have required going against the wingnuts and Teabaggers who dominate the Republican party in Texas. So Gov. Abbott apparently decided to keep it on the down low. But then, how would he explain placing the bill on the agenda for the special legislative session that summer. Something just isn't adding up.

His decision to take that knee was courageous. Exposing the dirty underbelly of local politics after losing an election isn't.

That which we feel is urgent, is not constantly important.