On December 8, 2014, Jenny Doe (her real name may be found in court records but I choose not to publish it), was called to testify in the rape trial of Keith Hendricks in the 176th District Court in Harris County. Mr. Hendricks was on trial for raping Jane Doe. 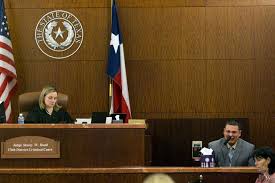 While on the stand testifying at trial, Ms. Doe had a mental breakdown (she had been diagnosed with bipolar disorder). Fearing that his witness wouldn't show up to testify again, the prosecutor, Nicolas Socias, asked the judge, Stacy Bond, to issue an attachment and to order Ms. Doe taken into custody.

The judge set her bond at $10,000. That's right, Jenny hadn't been charged with a crime yet she was being held behind bars because she couldn't post a $10,000 bond.

Ms. Doe was first taken to the hospital to be checked out -- she was then booked into the Harris County Jail. Making matters even worse, someone at the jail fucked up and entered that she was charged with felony sexual assault. Because no one at the jail knew she was being held as a witness, she was placed in the general population. While in jail she got into at least one fight with an inmate. She was later charged with assaulting a guard, though that case was later dismissed.

Jenny was not called back to the stand until January 11, 2015. Let that just sink in for a bit. Here we have the victim of a sexual assault who was taken into custody and held against her will for over a month because she had a mental breakdown on the stand. And even though she testified on the 11th, she was held for an additional three days before being released.

Texas law does permit the court to order a witness taken into custody if the state issuing the subpoena has reason to believe that a witness residing in the county is on the verge of moving out of the county or if an out-of-county witness failed to appear when subpoenaed.

Neither of those conditions were met in this case. Jenny resided outside Harris County and appeared without being subpoenaed. Mr. Socias might have been worried about her not coming back to testify after her breakdown -- but that didn't justify his request to have her attached. It certainly didn't warrant her being held in jail for over a month.

Now Stacy Bond, who is running for the bench in the 185th, has been sanctioned with a public admonition for violating the Code of Judicial Conduct.

Ms. Bond's excuse is she was mistaken in signing a badly worded application for a bench warrant. The application would have been filled out by the prosecutor, Mr. Socias.

You would think that the least the judge could have done was read the application before signing off on it. Actually you would think the judge might have consulted Section 24 of the Texas Code of Criminal Procedure to see whether the action was warranted. At the very least you would have expected a judge to show just the slightest bit of compassion to a witness who was having a very bad day. But, hell, once you decide to treat those accused of crime as garbage, it's not a far walk to treat everyone like that.

Ms. Bond is running as a Republican in the upcoming election. I'm sure that many Republican voters in the suburbs don't give a flying fuck what Ms. Bond did on the bench in the past. The only criterion for their vote is that the candidate have an "R" after their name.

(Yes, Galveston County, I'm talking about the mindless wingnuts on the mainland who voted straight-ticket Republican and ushered in the strange world of Christopher Dupuy, the single most unqualified person I've ever seen on the bench.)

Of course appointing judges brings about an entirely different set of problems that can be just as bad as electing them.

Ms. Bond doesn't deserve to sit on the bench anymore. I just hope this public reprimand resonates with voters in the 'burbs when they go to cast their ballots in November.
Posted by Paul B. Kennedy at 12:03 PM