Sid Miller steps right in it (and doesn't even know it)

Sid Miller is the Texas Agriculture Commissioner. The job appears to be primarily about promoting Texas agricultural products as well as slapping stickers adorned with his visage on gas pumps and scales in grocery stores.

Apparently one of the unwritten duties of Ag Commissioner is to promote white nationalist causes on state time.

But before we criticize the man, we should get to know him and his accomplishments in office.

Mr. Miller appointed a man who had his medical license suspended after being convicted of perjury in a case dealing with his marriage to his 15-year-old stepdaughter. His license was later revoked when he failed to report a malpractice claim. In addition, Rick Ray Redalen was not only in charge of a task force on telemedicine --  he was the founder of a company that marketed telemedicine services.

The self-proclaimed fiscal conservative then used taxpayer money to get a shot from John Michael Lonergan, also known as "Dr. Mike," who took up shop in Oklahoma after losing his Ohio medical license. This shot was a so-called "Jesus shot" for chronic pain.

Mr. Miller also billed the taxpayers for a trip to Mississippi so he could compete in a rodeo. And these were in addition to handing out big bonuses for employees who hadn't even had a job evaluation and raising regulatory fees on farmers, ranchers and grocery stores.

This latest incident, though, threatens to overshadow every other idiotic thing this man has done in office. You see, Sid Miller is sponsoring a specialty licence plate to honor Confederate soldiers. The plate would raise money for the Sons of Confederate Veterans. 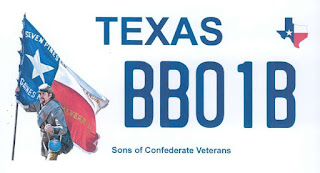 What the hell are the Sons of Confederate Veterans, you may ask. I was certainly curious. Here's a link to their website and here's what they raise money for:


The SCV Texas Division's continuing mission is to preserve the history and protect the honor and memory of our Confederate Soldier ancestors. But, we need your help.Please consider donating to our Heritage Defense Fund today. Time is of the essence as we see our flags, our monuments, and our historical sights attacked on a daily basis by those that have much more funding and undue influence with local government.

That's right. Their sole purpose is to maintain the symbols of the Confederacy and to protect the legacy of those who fought to preserve slavery.

Then there is this:


The Texas heroes pictured above like thousands of other citizen-soldiers who fought for the Confederacy personified the best qualities of America. The preservation of liberty and freedom was the motivating factor in the South's decision to fight the Second American Revolution. The tenacity with which Confederate soldiers fought underscored their belief in the rights guaranteed by the Constitution. These attributes are the underpinning of our democratic society and represent the foundation on which this nation was built.

Let's be honest here, the only people whose liberty and freedom mattered where white men. While the group's website states in multiple places that they are not racists and that they oppose bigotry, those statements are completely at odds with the political philosophy of the Confederacy.

Organizations such as this were created and founded during the dying days of Jim Crow when southern states did anything and everything in their power to maintain white supremacy. This group does everything it can to paper over the issue of slavery - which is quite the act of gymnastics considering that the expansion of slavery was at the center of the Civil War.

Sid Miller is yet another example of what happens when folks vote for a candidate simply because he has an R after his name.

His pimping for a license plate to honor the Confederacy reveals just what kind of a person Sid Miller is. No longer are folks hiding their support for white supremacists and racism. The Trump presidency has made it safe for people to be open about their true beliefs. Let's see if any of those college-educated whites who vote Republican in Texas give a fuck.
Posted by Paul B. Kennedy at 8:50 AM