Something to think about

I know I've mentioned the Small Town Murder podcast on here once or twice over the last year. Did I mention that thanks to a friend of mine, attorneys who attended the live show in Houston this past October received CLE credit from the State Bar? Easiest two hours of credit ever.

The show is a riot to listen to and James does a hell of a job researching the cases they cover. I listened to an episode from a couple of weeks back the other day and heard something I've never heard before on the show.

Generally after they make fun of the small town the case is set in, and the murderer, they cover the appeals process which usually ends with the defendant being sent to prison for a long stretch. Not so with the episode entitled Yes, No, I Don't Know... in Oskaloosa, Kansas. The story contains a twist at the end which you probably won't see coming. 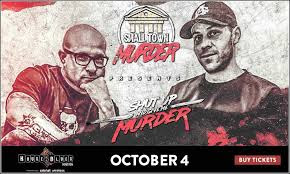 
Floyd Bledsoe, who had been convicted of the murder of 14-year-old Camille Arfmann was released from prison after serving 15 years for a murder his brother, Fred Bledsoe, committed. Mr. Bledsoe was released after the Midwest Innocence Project had DNA testing performed on semen found in the victim's body. Testing revealed that Ms. Arfmann had been raped by Fred Bledsoe. Two weeks later, Fred Bledsoe was found dead - his death was ruled a suicide. Fred Bledsoe left three suicide notes including one in which he confessed to the rape and murder of Ms. Arfmann. He claimed he was told to keep his mouth shut by the prosecutor after confessing to the crime.

That revelation brings a somber end to the story that makes you really think about the way our criminal (in)justice system works and what protections we have in place to protect the wrongly accused.
Posted by Paul B. Kennedy at 8:08 AM