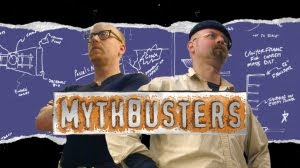 I caught a rerun of Mythbusters on the DVR the other night that dealt with intoxication myths. The boys decided to test whether there was any way to sober up faster than just passing the time.

Alcohol Myths (Oct. Alcohol Myths (Oct. 22, 2008) Is there such thing as "beer goggles"? Can running on a treadmill or slapping someone's face help to sober up a drunk person? Can an ancient medieval weapon really fire 200 arrows over 500 yards?

Click here to see the episode.
In order to test the remedies the boys used an agility test from NASA. They would trace a pattern with a marker and time themselves. They would both trace the pattern after drinking. Then one would try a "remedy" and the other would be the control. They would then trace another pattern afterward (each pattern was different but they were all the same length and had the same number of turns.
First up was coffee. Jamie and Adam both drank until they blew a .07 on the portable breath tester. Then they both traced a pattern. Jamie drank coffee. Five minutes later they traced the pattern. The scores for both Jamie and Adam increased from the first to second test. Coffee as a "remedy" to sober up was busted.
Next up was exercise. After drinking themselves to a .09 frenzy, Adam climbed aboard the treadmill and damn near killed himself. Adam's score on the tracing test increased after the exercise while Jamie's remained the same. They decided that exercise as a remedy to intoxication was plausible.
Now it was Jamie's turn to dunk his head into a bucket of ice water. The boys drank till they hit .08 and Jamie stuck his head in the ice-cold water. The scores on the tracing test were the same for both Jamie and Adam. Thinking about dunking your head in a bucket of ice to sober up? Think again. Busted.
The final remedy was The Slap. After getting their BAC's back up to the limit, Adam stood still while Jamie slapped him so hard his face looked like rubber. The slap sobered Adam up as his score on the tracing test improved. Jamie's, though, was worse. The verdict? Plausible.
Adam then made an interesting comment along the lines that exercise and slapping the face were shown to counter the effects of intoxication as demonstrated by the tracing test and the Breathalyzer. Now I can't speak to that last statement because we were never shown the PBT readings after the boys tested the "remedies" but the results of their tests challenge the notion that the only way to sober up is to sleep it off.
My advice is to take it with a grain of salt.
Posted by Paul B. Kennedy at 4:36 PM

I think if your at the limit and you have to sober up for something, you've made a mistake. Interesting, anyway.