Did the Chicago Cubs throw the 1918 World Series?

The feud in the Windy City between Cubs and White Sox fans may be heating up once again as a 1920 deposition given by "Black Sox" pitcher Eddie Cicotte has surfaced in the Chicago Museum of History alleging that the Cubbies threw the 1918 World Series. 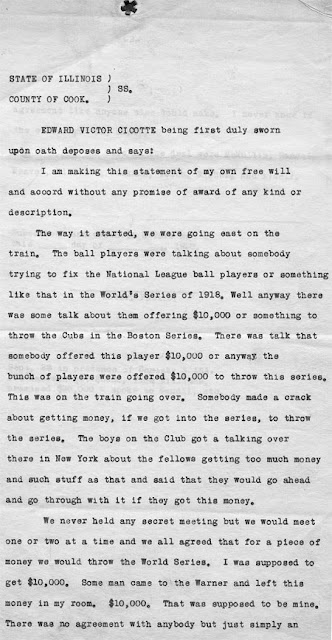 According to Mr. Cicotte, he heard the rumors while the Sox were heading east on a road trip in 1919.


"The ball players were talking about somebody trying to fix the National League ball players or something like that in the World's Series of 1918. Well anyway there was some talk about them offering $10,000 or something to throw the Cubs in the Boston Series. There was talk that somebody offered this player $10,000 or anyway the bunch of players were offered $10,000 to throw this series... Somebody made a crack about getting money, if we got into the series, to throw the series."

Mr. Cicotte went on to say:


"We never held any secret meeting but we would meet one or two at a time and we all agreed that for a piece of money we would throw the World Series. I was supposed to get $10,000."

The Cubs lost the 1918 World Series to the Boston Red Sox 4 games to 2. None of the games were decided by more than one run but there were some very interesting plays in each game that led to Red Sox victories. The following year the White Sox were heavily favored to beat the Cincinnati Reds in the World Series but came up short. It later surfaced that eight players for the Sox accepted money to throw the series. All eight were banned from baseball for life.

White Sox third baseman, Buck Weaver, was the only member of the Black Sox who did not accept any money to lay down. He, too, was suspended for life for not reporting his knowledge of the fix to team officials.

So maybe that supposed curse of the goat Cubs' fans blame for their team's post-season woes isn't the reason the team hasn't won the World Series in over 100 years.
Posted by Paul B. Kennedy at 2:00 PM