A tale of two men

British Prime Minister David Cameron said the other day that he would support safe passage out of Syria for embattled dictator Bashar al-Assad if it would end the bloodshed in that country. 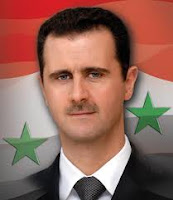 Mr. Assad is a murderer. He has turned his military on the people of Syria in the name of holding on to power until the bitter end. He has ordered planes and helicopters to fly over and bomb urban areas in an attempt to end the rebellion in the country.

Mr. Assange is a journalist who published secret (and not-so-secret) documents as part of a campaign for transparency. Wikileaks was provided information by Bradley Manning that revealed human rights abuses at the hands of the US government and its agents abroad.

Mr. Assad, much like his daddy, is a brutal dictator who cares less about the people of Syria than accumulating wealth and power. In response to the Syrian people who demanded more say in the running of their government, he cracked down on dissent and turned a political movement into a civil war.

Mr. Assange, through Wikileaks, exposed (and embarrassed) the US government by releasing State Department cables detailing the ways in which the US and its proxies operated under cloak of darkness and secrecy. He exposed the US backing of repressive dictatorships around the world and US-backed attempts to limit dissent.

Mr. Assad has committed crimes against humanity. He should be in the dock at the International Criminal Court answering charges for murder, torture and gross human rights abuses. Despite his actions, Mr. Assad is being promised safe passage out of the country in order to facilitate an end to the civil war.

Mr. Assange faces a complaint in Sweden that he sexually assaulted two women. Not charged, mind you. He has offered to answer any questions Swedish authorities have for him - provided that either the interview take place in the Ecuadorean embassy or that Sweden provide assurances that they won't extradite him to the United States to face a possible indictment alleging he committed treason.

Mr. Cameron is very much continuing the legacy of former Prime Minister Tony Blair who willingly allowed himself to be prostituted by the United States. Whatever Washington wanted from him, Mr. Blair was only too happy to do. The Obama administration has decided that it is time for Mr. Assad to step aside (while leaving brutal dictators in charge in both Saudi Arabia and Bahrain).

The US Government has also decided that the documents published by Wikileaks have so hindered the government's ability to pull the strings around the world, that Mr. Assange must be punished. Let us not forget that this has nothing to do with revealing state secrets - the White House has done that routinely over the years when it serves the President's purposes - it has to do with pulling the curtain back and exposing the Wizard.

In the meantime Mr. Cameron is okay with granting safe passage to a dictator, but not to a journalist. What's wrong with this picture?
Posted by Paul B. Kennedy at 8:00 AM