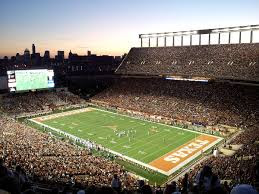 Chris Del Conte, the new athletic director at the University of Texas, has been making the rounds trying to drum up financial support for a renovation of the south end zone area and football offices.

He has talked about the need to improve the "game day atmosphere" at Texas football games in an effort to combat falling attendance. He has proposed closing off San Jacinto Street and turning it into a game day festival. He has suggested having concerts before and after games in the parking lot of the LBJ Library just north of the stadium. He has moved both the band and student sections for the upcoming season.

Over the last five years UT has been a .500 team. That's pathetic. It's so pathetic that some folks are willing to give their left nut for an 8-win season in 2018.

I'm a season ticket holder. I drive up to Austin four or five times a season. My kids love going - they don't care about the final score. They like hanging out on campus and stopping at Buc-cee's in Bastrop.

Texas hasn't had a good team since the 2009 squad that lost to Alabama in the title game after Colt McCoy was injured in the first quarter. It gets harder and harder to justify the expense of buying tickets and driving up to Austin after every loss.

I don't care what's going on around the stadium before the game. We're just as likely to go bowling at the Texas Union before the game as we are to go to the Alumni center or wander around campus or up and down the Drag.

Chris and his staff need to remember that it's a lot cheaper to sit on the couch with a cooler full of beer and watch Texas lose than it is to make the trek to Austin. That's the difference between winning and losing.
Posted by Paul B. Kennedy at 9:00 AM