As is to be expected in this era of forced patriotism and blind support of the military, NASCAR has forgotten what Memorial Day is supposed to be about. This weekend, NASCAR competitors will run with tires that say "Support Our Troops" instead of "Eagle." However, since this is all about the advertising, they will still say "Goodyear." 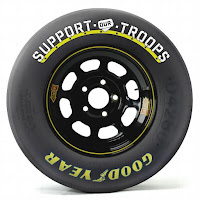 Need I remind anyone that the point of Memorial Day is to remember those who have fallen in service to their country (or corporate overlords as the case may be), not to go all RAH! RAH! for the military.

Memorial Day began as Decoration Day in the late-1860's -- a day to remember those who died in the Union cause during the Civil War. It remained a day of remembrance for the Civil War up until the time the US got involved in World War I - a war fought among European colonial powers. It became a federal holiday in 1971.

But, as they say in wrestling, going all pro-military is cheap heat for NASCAR and its reactionary supporters. And to further pervert the original meaning of the day, I guarantee you that there will be confederate flags on poles and t-shirts all around Charlotte Motor Speedway.

Of course, in fairness, Major League Baseball isn't much better in "celebrating" Memorial Day by having teams wear uniforms with camouflage script.
Posted by Paul B. Kennedy at 8:00 AM