Some light reading for a Sunday morning

Here are a few non-law related articles I've come across recently that I found quite interesting... 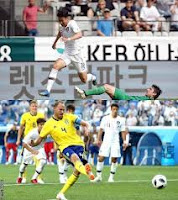 First, you've heard at least one of your relatives, classmates or co-workers comment that all Asian people look alike. If we take a look at how well people can identify folks of different races or ethnic groups, there is more than a little truth in the statement. We know, for instance, that a white witness is less likely to pick the differences out among a lineup of black or Latino males than a bunch of white guys.

In  preparing for their World Cup opener, the South Korean team tried an experiment to see just how well white folk (Swedes, for instance) could tell the difference among Korean soccer players by switching numbers in their World Cup warm-up games.

Back when I was in high school, ESPN was still undergoing birthing pains. If you watched the channel's update in the morning to see what was on during the rest of the day you could feel their pain, too. From tractor pulls to Aussie Rules Football to lumberjack contests and everything in between -- except for live sporting events from the NFL, NBA, MLB or NCAA.

Back in the early 80's I was a big boxing fan. ESPN teamed up with the ever-corrupt Top Rank, Inc. (headed by Bob Arum - who only looked honest when sitting next to his main competitor, Don King). They put together a live weekly boxing show called Top Rank Boxing that featured a bunch of up-and-comers and soup cans. One of the most popular fighters was a New Jersey middleweight names Bobby Czyz. His career didn't quite work out as expected. Here is the story of how boxing chews up and spits out fighters.

I'm no Aggie, but I'll be one of the first to admit that Johnny Football was one hell of a college quarterback. I still remember sitting on my brother's sofa that Saturday afternoon when A&M dealt a beatdown to Alabama in Tuscaloosa. Damn, could that kid ball.

Unfortunately, being coddled all his life because of his talent didn't do Johnny Manziel any favors in the maturity department. His career in the NFL never got off the ground because he couldn't stay out of trouble - and without a silver-haired coach or big money boosters to shield him, his foibles played out on ESPN and TMZ on a regular basis. I think his decision to leave college early was one of the worst decisions he could have made -- he needed some more time to mature before going off on his own.

Johnny Football hit rock bottom and now he's trying to climb out of the hole he dug one step at a time. Here's a look at his most recent comeback. And, just as I wanted Vince Young to return to the big stage, I hope Johnny makes a return one day. Kids with that much talent deserve a shot.
Posted by Paul B. Kennedy at 9:00 AM