To what depths will they plunge?

There were a number of things I was thinking of writing about today, but when I saw this flyer in my mailbox there was no way I couldn't write about it.

Stan Stanart is the Harris County Clerk. He is a very inconsequential man. He is nothing more than a hack with an R after his name who was fortunate enough to run in an off-year election in which white republican voters from the suburbs voted en masse because they had a problem with a black man living in the White House.

The front of this mailer reads "EMERGENCY NOTICE." It is designed to look like an official piece of mail - it even has a generic seal with a lone star to hint at the seal of his office. 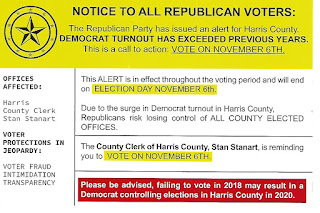 Mr. Stanart tells the old white ladies that voter protections are in danger if he loses the election. He warns that there could be voter fraud, intimidation and lack of transparency if a democrat wins the race for County Clerk.

Now this is where republican candidates such as Mr. Stanart try to spin reality on its head. The only voter intimidation going on in Harris County right now are photo ID requirements that are reminiscent of the poll tax. For instance, his office insists on denying college students the right to vote with their student IDs but folks can use their concealed handgun license as a form of ID to get a ballot.

The ad is misleading. It is designed to stoke fear. And, most importantly, Mr. Stanart is lying.