Eight hours of Zen in the woods 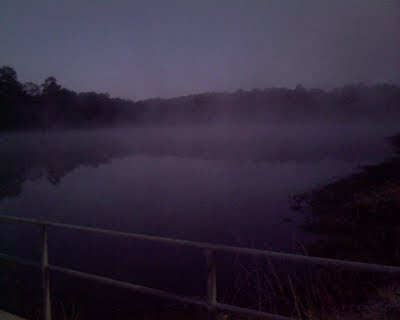 A view of Lake Raven (Huntsville, Texas) before dawn on 12/5/09.
On Saturday I spent an amazing eight hours running 33 miles (should have been 31 miles, more on that later) through Huntsville State Park (an hour or so north of Houston).
Up until last year Sunmart sponsored the Texas Trail Endurance Runs (50 miles/50K) but this year Sunmart ran into a little legal problem and dropped their sponsorship of the race. There was concern that the popular trail run was finished but thanks to Roger Soler, the trail run lives on.
By complete coincidence I met a fellow Houston attorney as I braved the freezing cold and climbed out of my car. He was running the race with a running buddy of his and asked if I'd like to run with them. Why not?
Everything went well on the first 7 mile loop. We got back to the start/finish line and ditched some of our gear and headed out on the first of two 12-mile loops through the trails. What we didn't know at the time was that the course had been changed - we would be running on the same trail the 50-miler was run on. The run was great, the weather was fantastic and the company couldn't be beat.
We crossed the start/finish line in about 4 hours and 20 minutes as we headed back out for our final loop. After 19 miles we were tired and our legs were getting heavy. I've always found that one of the hardest things to do was convince myself to go back out there for the final lap. But off we went.
Everything went swimmingly until we got to the aid station by the dam. Even though we had already been through there earlier the three of us managed to take a turn to the left when we should've turned to the right. We all had a weird feeling as we headed out to the back of the park. Something didn't feel right but we weren't sure what happened. Finally we stopped and assessed the situation and realized we were off course. We had no idea how we got off course or how far we had gone off course. It was time to backtrack.
And so back we went until we found the bridge and the trail markers. We still don't know how we managed to miss them -- but we were back on course. The upside of it was we covered an extra two miles. On we went and about 90 minutes later we crossed the finish line three abreast.
I've written about it before, but the beauty of trail running is living in the moment. You can't take your mind off the task at hand because of the roots, holes and other hazards on the course. My run partners and I spent eight hours on Saturday living in the present -- and there is no better way to live.
While you can't forget your missteps in prior trials, you can't let them ruin your trial prep. Every trial is its own beast and instead of dwelling on past mistakes, learn from them.
As our run shows, it's easy to get off track in the trails and in trial preparation. Sometimes you just need to step back and look at the overall picture to determine whether you're still on course. If you're not, stop and backtrack. If you look carefully enough you'll find the correct path.
Posted by Paul B. Kennedy at 4:24 PM