This past Thursday I had to appear in Montgomery County to enter my grandmother's will into probate. Since I also had to appear for a colleague in a justice of the peace court in Magnolia, I decided to spend the time in between at my parents' place.

A few months back a storm blew down an oak tree in my parents' backyard. My dad, knowing my love of smoking meat, asked me if I wanted any of the wood for my pit. Of course I said "Yes." He told me I could come up anytime to get what I needed.

So Thursday was the day.

Now I've never probated a will before - and, had there been anything screwy about this one I wouldn't have touched it. When we got into the courtroom we sat down. I'd read the State Bar's probate book and was familiar with the questions I was supposed to ask - but I wrote some of them down as a cheat sheet. Not knowing the local customs in these matters I turned a keen ear to every proceeding. Our little hearing didn't go as smoothly as I'd hoped, but we got out of it in one piece with the mission of the morning accomplished. 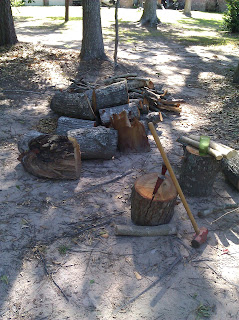 Then it was off to my parents' house and that oak tree. It had already been sectioned so all I had to do was split how ever many sections I wanted. I took one chisel and seeded it and then I took the other chisel and did the same thing. Then I lifted the sledge hammer and pounded each chisel - first one and then the other. After a couple of strikes the most amazing thing happened. 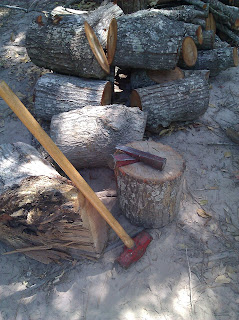 As the wood began to split I could hear the sound of the wood splitting long after striking the chisel. It was a steady sound as the force of the blow was carried deep into the section of wood.

It was hard work. I was sweaty and dusty. My hands blistered. My back and shoulders sore. But I had a trunk load of oak for my pit. It was another "dirty job." There was a starting point. There was an ending point. And there was evidence that I had actually accomplished something in the meantime. 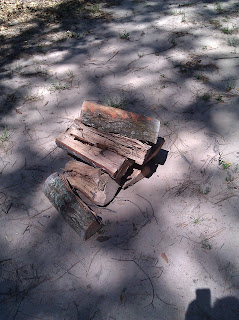 It was a nice change of pace from the law - where you're never really sure at the end of the day just what, if anything, you did accomplish that day.
Posted by Paul B. Kennedy at 2:00 PM

Email ThisBlogThis!Share to TwitterShare to FacebookShare to Pinterest
Labels: personal