These companies operate as if they were a political unit all to themselves. Their annual gross profits are greater than the GDP of many developing nations and their corporate boards are more like mini-parliaments. Their shareholders more like voting constituencies.

Lenin spoke of the coming era of state monopoly capitalism as being the most developed form of capitalism. Lenin was wrong. Transnational corporations have largely jettisoned themselves from the shackles of national governments. They are big enough to employ their own armies and conduct their own foreign policy.

And that brings us to Pulitizer Prize winner Steve Coll's new book Private Empire: ExxonMobil and American Power. Mr. Coll takes us deep inside the inner workings of ExxonMobil and shows how the company built itself into something more akin to a nation-state than a corporation. 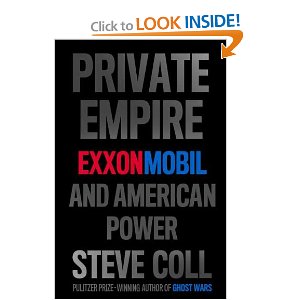 ExxonMobil employed its own global security force and even contracted with foreign governments to conscript their soldiers into its own security force. As a result, ExxonMobil found itself answering to complaints of human rights violations in Aceh and Nigeria.

Mr. Coll also outlines the ways in which ExxonMobil manipulated the science around global warming by buying scientists and institutes to push their message that global warming was just conjecture. It's a reminder that what is passed off as science - in politics as well as in the courtroom - isn't necessarily science. He also takes us through the path ExxonMobil set out on when management realized that they couldn't deny global warming anymore.

And when ExxonMobil's corporate plans conflicted with US foreign policy, the leadership of the company was quick to point out that the most important consideration in deciding how to proceed was how any given decision would affect the shareholders.

The book seems to alternate between being an expose of ExxonMobil and the way it operated as a nation unto itself and a defense of the company. Some portions read more like an ExxonMobil press release reminding us that the people that run the company are smarter than everyone else.

There is one area in which the book provides a brilliant insight - how the oil market operates. Oil is fungible. It's a commodity. When a refiner purchases oil on the open market it doesn't matter whether that oil was extracted from the United States, the Middle East, Africa or anyplace else in the world. In the overall scheme of things it doesn't matter where that last barrel of oil came from. Oil will go where the profits are highest. Therefore, threatening to cut off a nation's ability to export oil in the event of a political dispute (Iran, for instance) is a losing proposition. In a liquid market it doesn't really matter where the oil that produced that tankful of gas you put in your car came from.

Like any successful corporation, ExxonMobil cares only about maximizing returns to shareholders. And if those decisions have negative consequences for the United States, then that's just the cost of doing business.
Posted by Paul B. Kennedy at 7:00 AM