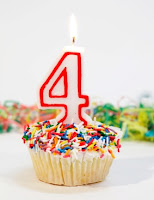 Four years, and 1633 posts, ago yesterday the first words appeared on this blog. The post was about the need for PR bonds in Harris County. Although there are more handed out now than there were back in 2009, there are still way too many folks who are coerced into pleading guilty in exchange for a ticket out of the Harris County Jail.

Despite the fact that bond is not to be used as a punitive measure, too many judges at the Criminal (In)justice Center still use bond and pretrial release as measures to put the screws to defendants. Up in the felony courts I can guarantee you there are plenty of folks who are being held without bond illegally because there is no one to challenge the coercive polices of the Harris County District Attorney's Office or the berobed ones.

Far too few attorneys have read Article 1, Section 11a of the Texas Constitution. Pick it up and read it. It will open your eyes.

Once again I want to thank everyone who has dropped by over the past year and read a post, left a comment or an instant message. I appreciate both your kind words and your criticism.

Here are the top five read articles from the past twelve months:
I hope y'all continue to find the content here interesting, informative or at least thought-provoking. It's been my pleasure to bring this blawg to y'all and here's looking forward to the next twelve months.
Posted by Paul B. Kennedy at 8:00 AM