The turning of the tide 150 years ago 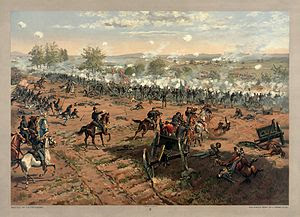 150 years ago today dawn broke over the fields and foothills of Central Pennsylvania where the armies of George Meade and Robert E. Lee were encamped. The evening before the forces of Col. Joshua Chamberlain held the Union flank against repeated Confederate assault.

The cannons roared all afternoon as the Confederate army bombarded Union positions at the top of Cemetery Ridge. The Union artillery kept up a steady fire on the soldiers sheltered in the woods at the bottom of the ridge.

Toward the end of the afternoon, Confederate General George Pickett led 12,500 Confederate soldiers on a charge up the naked ridge. His men never stood a chance as they marched without cover on the entrenched Union army. The target was a small grouping of trees near the center of the Union line. While some of Pickett's men reached the target they were cut down in hand-to-hand combat.

As the slaughter came to an end, the Confederate forces retreated down the ridge and back into the woods. The next morning they began the march back to Virginia. It was the last concentrated Confederate assault on northern soil during the War.

The Civil War appeared to be near an end, but it would take almost two more years, and thousands of casualties, before it was finally over.
Posted by Paul B. Kennedy at 8:00 AM