Why shouldn't Puig be an All-Star? 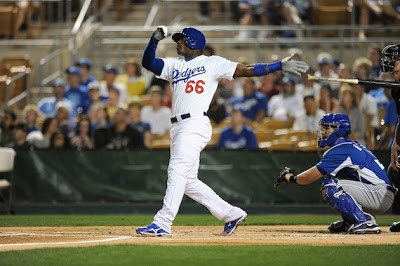 Yasiel Puig is a rookie for the Los Angeles Dodgers who defected from Cuba last year. His first full month in the majors was the best for any rookie other than Joe DiMaggio. Currently he has a .407 batting average and an on-base percentage of .441. He is one of the candidates for the final spot on the National League's All Star roster. People who wouldn't ordinarily watch baseball are tuning in to see him play.

As the fans have been swept up in Puig-mania, there are those pundits of the sacred game who think it would be a travesty if a rookie with barely a month's time in the big leagues were to play in the Midsummer Night Classic. Critics, among them Philadelphia closer Jonathan Papelbon, say it would make a joke of the All-Star game if Puig were to make the roster.


“The guy’s got a month, I don’t even think he’s got a month in the big leagues, and just comparing him to this and that, and saying he’s going to make the all-star team, that’s a joke to me. It’s just really what happens in baseball when… to me it really does an injustice to the veteran players that have been in the game for eight, nine, ten plus years, and it kind of does them an injustice because they’ve worked so hard to stay there.” - Jonathan Papelbon

No, what makes the All-Star game a joke is that, thanks to Bud Selig, home field advantage in the World Series is granted to the team from the league that wins an exhibition game. Back in the day the All-Star Game meant something. It was the only time, other than the World Series, that you could see players from both leagues on the same field at the same time.

The game has become a joke on its own as the starters play no more than a couple of innings before bench players begin making their appearances. It has become more important for a manager to get all of his players in the game than it is to win the game. That's what led to the dreaded tie game a few years ago - in the rush to get everyone in the game the managers left themselves with no one on the bench as the game headed into extra innings.

The joke isn't that the most astounding rookie in years might get a spot on the roster. The joke is that a game that could be decided in the late innings with the starters long gone will determine who gets home field advantage when the World Series comes along in October.
Posted by Paul B. Kennedy at 7:00 AM