Barbecue and Longhorn football - it doesn't get any better

This past Saturday I took my youngest on a field trip out to Austin to watch the Longhorns open their 2013 campaign. This season marks the 50th anniversary of the first national championship for Texas. On the way up to the Forty Acres we stopped in Lockhart for some barbecue. 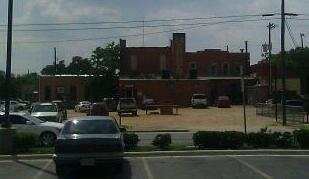 That building you see across the street from the CVS parking lot on US183 is the famous Smitty's Meat Market. 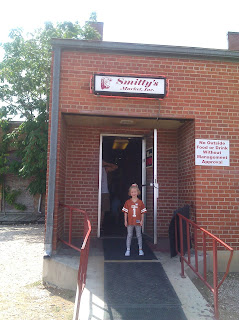 Here's my assistant standing at the entrance to the market. The entrance, by the way, is in the back of the building. The dining area sits in the front of the building on the courthouse square. 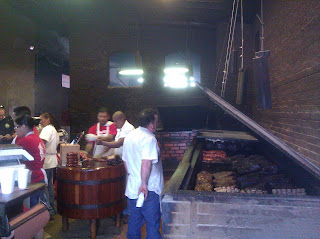 Waiting in line for our 'que and staring at the mouthwatering sight of ribs, briskets and sausages on the massive pit. 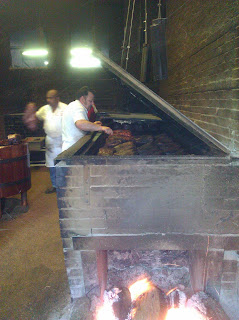 Here's the business end of the pit. That's an open fire burning at the end of the pit. It was in the mid-90's on Saturday outside and over 100 inside. My daughter thought it was so hot she refused to stand by the pit and sat on a bench instead.

As usual I ordered brisket and sausage. Since we were packing up the meat to eat up in Austin we didn't order any sides (my wife packed a variety of fruits and some edamames for a little balance to our dinner). We had a choice of crackers or good ol' white bread. I chose the bread (for making sandwiches). The meat was wrapped up in heavy duty butcher paper and put into a heavy brown paper sack along with the bread.

The meat smelled heavenly as we made our way up to Austin. After watching the football team walk into the stadium we headed back to our car - parked just behind the Tower - to eat. There are few things better than eating good barbecue on game day out in a parking lot underneath the Tower.

If you find yourself heading out to Austin along I-10, you need to make the side trip out to Lockhart. The barbecue is worth driving a little bit out of your way.
Posted by Paul B. Kennedy at 7:00 AM

Email ThisBlogThis!Share to TwitterShare to FacebookShare to Pinterest
Labels: barbecue