On our drive up to Austin a couple of weeks ago for the UT season opener (which is looking increasingly like the only game worth going to this season), my youngest daughter and I made a pit stop in Lockhart, Texas for some barbecue.

But we discovered another treat as we walked around to the "front" of Smitty's on the courthouse square. There, in front of us, was an absolutely gorgeous courthouse. 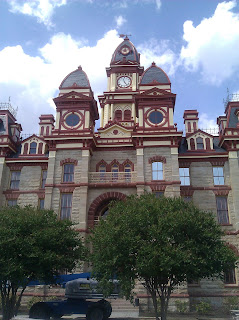 From this angle you can see the mansard roof and the four-faced Seth Thomas clock. The building kind of reminds me of a gingerbread house with all of the color and detail. 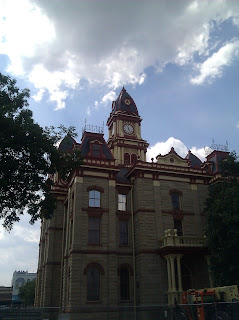 The clock tower seems even more impressive from this angle. The courthouse almost looks like a castle. 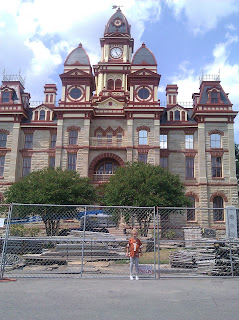 Here's my assistant out in front with the full majesty of a beautiful building behind her. She chose her outfit, by the way.
Posted by Paul B. Kennedy at 7:00 AM