Today is being touted by some as Mack Brown's last stand. The feeling in some quarters is that anything short of a Texas win at the Cotton Bowl will lead to a coaching change at the end of the season. 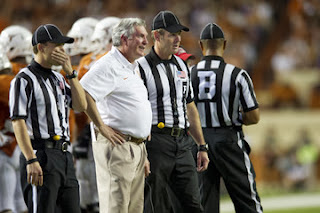 With the upcoming retirement of UT Athletic Director DeLoss Dodds, it is very possible that there will be someone other than Mack Brown on the sideline when the Longhorns kick off the 2014 season. But, if you take a closer look at who may or may not be available, the odds may very well favor Mack Brown keeping his gig as the head man at the Forty Acres.

Keep in mind that if you want to show Mack Brown the door, you damn well better have someone in mind to take his place. Mack might not be the best coach in the country, but he's a damn sight better than most. You should also keep in mind where the University of Texas was when Mack Brown took over.

From the last year of Darrell Royal's tenure through the John Mackovic experiment, the Longhorns spent two decades wandering through the desert. Yes, they had the national title in hand in 1977 under Fred Akers - that is, until they were dismantled in the Cotton Bowl by Notre Dame. They had another shot a few years later until they lost to Georgia in the Cotton Bowl as well.

The three most attractive candidates for the job are Art Briles, Gary Patterson and Chris Peterson. But I think we can take Briles and Patterson out of the equation early. Both coach in the Big XII and I think it's extremely doubtful that either one would leave their post for the Texas job. That would leave Chris Peterson from Boise State. He has kept the level of play high despite being at a significant disadvantage in recruiting. Just imagine what he could do with the type of players he'd have in Austin.

But would he want to deal with all the distractions that come with being the coach at Texas? Would he be comfortable schmoozing with big donors? What about hosting two weekly shows on the Longhorn Network and being the star of a weekly behind-the-scenes show? And what about the media glare and the expectations that come with the job?

Once you get past the big three there just aren't that many serious candidates for the job. Maybe James Franklin at Vanderbilt - but would he be ready to step up? There's Charlie Strong at Louisville. He served as defensive coordinator at Florida under Urban Meyer. With his star quarterback graduating he might be willing to listen to offers. But is he ready for Texas? Then there's one more intriguing prospect that someone mentioned to me today - Mark Richt from Georgia.

He's got the experience coaching a major state school. His teams have competed for SEC titles. He is used to coaching in the spotlight and he's been on the hot seat before.  He is, from all appearances, a class act. But would he want to leave Athens to move to Austin?

And, no, Nick Saban isn't coming to Austin.

So, for those of y'all wanting to shove Mack Brown out the door, who are you going to hire in his place?