It's election time here in Houston and, with the Republicans in power, we've got to deal with voter restriction measures such as the requirement that a voter present a government-approved photo ID before being allowed to carry out their constitutional right to vote.

It's interesting that when the GOP was winning presidential elections (or, stealing them with the help of the US Supreme Court and local voter officials), no one from the right raised the slightest hint of voter fraud. I suppose it's because the last thing you want to do is draw attention to voting irregularities when your own party is elbow-deep in suppressing votes in minority areas.

Here is a look at the poster that Harris County Clerk Stan Stanart is posting at voting locations throughout the county: 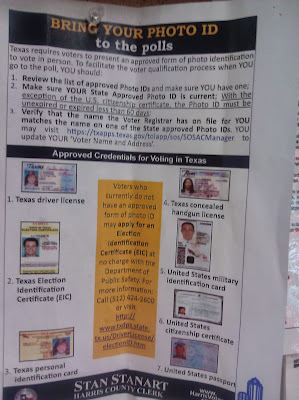 Interesting that a military identification card or a concealed handgun license is acceptable ID for voting purposes, but a photo ID issued by a public college or university doesn't quite cut the mustard. Kind of speaks volumes about the importance we place on education here in the Lone Star State as opposed to how we play violence on a pedestal.

And, as an aside, since when did the office holder become more important that the office? Most elected county officials now place their names above the name of the department they head. Just something to think about.
Posted by Paul B. Kennedy at 7:00 AM

It's very easy to get an ID from a college or university compared to the military or state CCW.