There have been five great extinctions that we know of through the fossil record. The most famous of those extinctions was the wiping out of the dinosaurs after a meteor struck the earth some 65 million years ago. The most important one was the great extinction at the end of the Pre-cambrian period.

Elizabeth Kolbert's new book, The Sixth Extinction, takes a look at the five great extinctions with the aim of finding some common thread. She begins with the death of frogs in Central America thanks to a fungus the overwhelms their systems. This decimation becomes the lens through which she views the great extinctions. 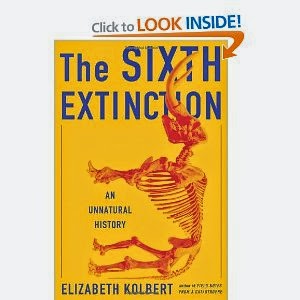 The late Stephen Jay Gould was a professor at Harvard University who wrote extensively on evolution. His book, The Wonderful Life, detailed the great extinction at the end of the Pre-Cambrian period. In that book Dr. Gould makes the controversial argument that species come and go not because of how well-adapted they are (or ill-adapted for that matter) but because some random change in the environment changes the rules of the game. According to Dr. Gould, the evolutionary history of our planet could have been very different but for a random event at some point in our ancient history.

The book casts a skeptical eye at the notion that we are on top of the evolutionary chart because we are the most advanced life form. We're here, says Dr. Gould, because random events in the distant past rendered other species extinct which allowed early humans to develop. During the Pre-Cambrian extinction, about 90% of the species inhabiting the Earth died out.

Ms. Kolbert takes Mr. Gould's theory and runs with it.

Her thesis is that life develops and evolves in a fairly hum-drum sort of way until some event occurs that renders the adaptations of many species moot. For instance, one mass extinction was caused by the "sudden" acidification of the oceans. Sudden, of course, being a term of art in the world of evolutionary biology. At some point, long ago, an event occurred that raised temperatures on Earth. The rising temperatures caused the oceans to become acidified. This acidification spelled doom for some species who were perfectly well adapted to their environment. They went extinct, not because they were low men on the evolutionary totem pole but because they couldn't adapt to a random change in their environment.

Her warning is that just because we seem well-adapted to our existing world doesn't mean that we will be able to adapt to changes in our environment. Change might take us out on its own accord, but we could also be taken out because of changes that have negative impacts on those species on which we depend.

She reminds us that just because we're on top of the food chain today it doesn't mean we'll be on top in the future. At one time giant dinosaurs were kings of the planet. Then a meteor hit and temperatures plunged because of the thick clouds of debris in the sky. The change in temperature meant doom for the species upon which dinosaurs depended. And as their food supply dwindled, so did the dinosaurs. In their day no one could challenge them - but then, due to a random event, they were gone.

Are we doing the same thing to ourselves?
Posted by Paul B. Kennedy at 7:00 AM