Driving down to Live Oak County this week, a friend and I decided to see which of the two Czech purveyors of barbecue along US59 was better. We ate dinner at Prasek's in Hillje on the way down and lunch at Mikeska's in  El Campo on the way back. 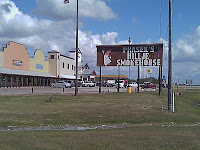 I had the brisket and sausage plate at Prasek's with a double shot of baked beans for dinner. The meat came smothered in a spicy barbecue sauce (a definite no-no in my book). The brisket was sliced thin and didn't hold up to the sauce. The sausage, on the other hand, was a definite winner. It was firm and more than held its own against the sauce. There was also a huge bucket of sweet tea to wash down the smoked meat.

Prasek's has done a serious renovation job over the last year and the restaurant is huge. There's a meat counter (any kind of jerky or smoked meat you want is right there), a giant beer cooler with a selection that would rival a small Spec's and a giant salt water aquarium. It looked like a restaurant happened in the middle of a Buc-cee's. 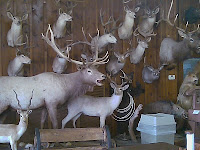 For lunch I grabbed a brisket and sausage plate at Mikeska's with corn, mashed potatoes and banana pudding. No sauce. My belief is that properly smoked meat doesn't need any sauce as it should be firm but not dry with lots of smokiness. The brisket at Mikeska's was hands-down the better of the two. The burnt ends were heavenly. The sausage, on the other hand, left a bit to be desired. The banana pudding, however, was incredible. (A special thanks to the girl behind the counter who told me that banana pudding was a side.) Mikeska's feels like a big cafeteria - albeit with a wall full of stuffed animals.

My verdict? You can't go wrong at either place. If you go to Prasek's tell the man behind the counter either you don't want sauce or you want it in a cup. If you go to Mikeska's, just skip the sausage so you have plenty of room for the banana pudding.
Posted by Paul B. Kennedy at 9:00 AM

Email ThisBlogThis!Share to TwitterShare to FacebookShare to Pinterest
Labels: barbecue