Time for a little humor and science...

A Missouri man was arrested for driving while intoxicated after he lost control of his car on an icy road. The motorist, Thomas Drummond, insisted that he was sober at the time of the accident and only drank afterward in an attempt to keep warm.

A southeast Missouri man has been acquitted of drunk driving after claiming that he consumed alcohol to keep warm after - but not before - he lost control of his vehicle on an icy road.

Thomas Drummond of Jackson told a court that he had been driving home after a night out with friends last February when his vehicle veered off the slick highway and into a culvert. Drummond says he was not intoxicated while driving, but that he was by the time emergency workers arrived more than two hours later.

Defense attorney Stephen Wilson says it was a set of facts you don't see every day.

(Thanks to the Associated Press.)

Of course the only problem is that alcohol will not keep you warm in the cold. What alcohol actually does is dilate the capillaries. And in extremely cold conditions, that is a recipe for disaster. 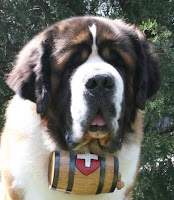 When we get cold our bodies react by pulling blood in toward the core of the body in an attempt to keep our core organs functioning. To do this, the capillaries in our extremities contract to reduce the flow of blood to our hands and feet. By drinking alcohol we increase the flow of blood to our extremities (which makes our fingers and toes feel warmer) and that causes our core body temperature to fall.

So, if you find yourself stuck in a snow drift, you might be better off passing on the brandy bottle around the St. Bernard's neck.
Posted by Paul B. Kennedy at 10:00 AM