Taking a sledgehammer to the First Amendment

noun \-nə-list\
1
a : a person engaged in journalism; especially : a writer or editor for a news mediumb : a writer who aims at a mass audience
Now that Wikileaks founder Julian Assange is out on bail in England, the US government is looking for ways to charge Mr. Assange with conspiracy for passing along classified information. The Justice Department is investigating the way in which Army Pfc. Bradley Manning passed the leaked cables to Wikileaks.

Prosecutors are looking at a transcript of an online chat log in which Mr. Manning claims to have communicated with Mr. Assange. Mr. Manning also alleges that Mr. Assange provided him with access to a dedicated server for the uploading of the secret documents. 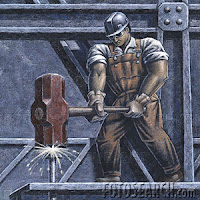 So, in order to deflect attention from the contents of the cables, los federales are willing to take a sledgehammer to the First Amendment and go after a journalist who provided a forum for an individual who had documents he wanted to see the light of day. There is no conspiracy. At least no more of one than exists anytime a reporter accepts information from a source with the promise not to reveal the source's name. Pentagon Papers, anyone?

Mr. Assange may have provided Mr. Manning with access to a server. That is no different from a reporter agreeing to meet a source in a parking garage, in a park or in the back room of a pool hall. Bit and bytes are the coin of the realm today - not reams and reams of paper.

If Mr. Manning did indeed release the secret cables then he is guilty of passing along classified information. But Mr. Assange broke no law by posting the information online.

This little witch hunt being conducted from Washington is nothing more than an attempt to silence the critics of the government and the journalists who provide them a forum to do so.
Posted by Paul B. Kennedy at 9:00 AM