Let it not be said that I won't read something with which I disagree. American Sniper: The Autobiography of the Most Lethal Sniper in U.S. Military History was written by Navy SEAL Chris Kyle and details his account of his time in Iraq during the second Iraq War.

The book, co-authored by Scott McEwen and Jim DeFelice, is just about as hackneyed and cliched as it can be. If you've ever read Lance Armstrong's first book It's Not About the Bike, you're familiar with the author recounting in infinite detail just how good he was at everything he did. Mr. Kyle shines the light firmly on himself. 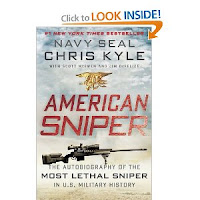 If you've ever seen Full Metal Jacket or The Boys from Company C then you can already guess the manner in which Mr. Kyle covers his basic training for the Navy at for the SEALS. He then spends an inordinate amount of time throughout the book regaling us of stories of bar fights and brutal hazing rituals. In Mr. Kyle's world, a SEAL is but a drunk sailor with a temper. No fight is ever the fault of Mr. Kyle or his fellow SEALS - but neither do Mr. Kyle nor his mates seem to understand how to walk away from a barfight.

He then takes us into Iraq and the world of the sniper. Mr. Kyle fought in Baghdad, Fallujah, Ramadi and Sadr City and he paints a visceral picture of what that world looked like to him. Of course he never questions the mission. His job, as he defines it, was to kill the savages that opposed the U.S. Those he killed weren't human - they were animals. There is no concern about their families or the war-ravaged land in which they lived. On the other hand, there is tragedy any time an American is killed or wounded.

The killing didn't seem to bother Mr. Kyle - except for the teenager he shot to death who was carrying an AK-47. The emotional effects of that killing led him to an early exit from Iraq due to health concerns. But his conflict about the shooting seemed to be more about his reaction to killing a teenager than the fact that a child was killed in a senseless war.


As the Marines came in, a teenager, I'd guess about fifteen, sixteen, appeared on the street and squared up with an AK-47 to fire at them.

A minute or two later, an Iraqi woman came running up, saw him on the ground, and tore off her clothes. She was obviously his mother.

I'd see the families of the insurgents display their grief, tear off clothes, even rub the blood on themselves. if you loved them, I thought, you should have kept them away from the war.

That is the callousness that seeing death on a daily basis brings about. This is what we create when we send our young people around the world to carry guns and kill people with whom we disagree. War should not be looked at as an admirable thing. War should be looked at as our failure to act in a responsible manner. Sending our youth to face death and the mind-altering effects of war is despicable.

Mr. Kyle sums up his attitude toward the mission as such:


But I didn't risk my life to bring democracy to Iraq. I risked my life for my buddies, to protect my friends and fellow countrymen. I went to war for my country, not Iraq. My country sent me out there so that bullshit wouldn't make its way back to our shores.

I never once fought for the Iraqis. I could give a flying fuck about them.

Looking at the aftermath of most places the U.S. has gotten involved in since World War II, that seems to be the attitude of the people in charge as well.

(Special H/T. to Mark Bennett for the link)
Posted by Paul B. Kennedy at 8:00 AM

Email ThisBlogThis!Share to TwitterShare to FacebookShare to Pinterest
Labels: Iraq, war on terrorism

C'mon, Paul . . . Are you seriously surprised/upset that a soldier who is very specifically trained to neutralize threats (by efficiently dispatching with prejudice those who threaten) does not view his role in geopolitical terms?

No, what concerns me is Mr. Kyle has portrays himself as a courageous hero yet he fails to understand that the people at whom he shot were just as human as he.

He seems to forget that he was part of a force that invaded another country. Put the shoes on the other foot and he'd be one of those "savages" trying to kill off the invaders.

And then someone on the other side would hail as a hero their sniper who undertook to neutralize Kyle and his buddies. Not an uncommon story . . . One man's whistleblowing hero is another man's snitch.

I'm not going to claim that Kyle is a hero; he expends enough energy in that regard. However, he signed on to do a job, the very essence of which is to kill one human at a time and make a graphic point with the decedent's friends. For that job, disassociation is a positive attribute.

You would prefer he be politically correct as opposed to honest. He was a hero, a common man with an uncommon mission. He didn't decide to invade Iraq by the way. He did his job faithfully with pride and love, yes love of his country and his fellows. If you have any beef, you shouldn't take it out on him. His book is his perspective not a political treatise to be analyzed or judged as a work on geopolitics.

I've read a couple of different reviews of this book since the author was himself shot and killed.

This is the best one I have read, and that includes reviews in some of the bigger newspapers.

Excellent and moving piece, Paul. If you ever leave the law, you may have another career waiting for you.

Thank you for the kind words.

Great review! I'm going to be seeing the movie this weekend. I've heard a lot of mixed review on this.