Book review: A Universe From Nothing

Yep. We've all heard it before. "Nothing from nothing is nothing."

But, maybe not exactly.

In his latest book, A Universe From Nothing, Lawrence M. Krauss takes a look at the history of the search for the origins of the universe. We go from the grand scale of the universe to our galaxy all the way down to the elemental particles of quantum mechanics to figure out how the universe began and how it will end. 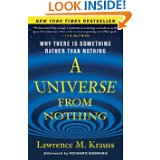 Mr. Krauss was instrumental in researching the shape of the universe. Based on his observations and calculations, the universe is, essentially, flat. While he tells us this is good news because it means the universe won't collapse in on itself someday, he also gives us the bad news. It seems that sometime in the far off future there will be no more stars in the sky because the universe will have expanded to such a point that the nearest galaxies will be too far from the Milky Way for us to see them in the nighttime sky.

He points to an odd symmetry in the notion. For centuries we couldn't look out beyond our solar system. There were points of light in the sky but no one knew how far away they were. No one knew anything about them. Then we developed the tools to explore the heavens. But, at some point trillions of years from now, there will be nothing in the sky for people to see. It will be as if they never existed.

Mr. Krauss also looks at the origins of our universe. He demonstrates how virtual particles can appear and then, as if they were never here, disappear. He shows how the sudden appearance and disappearance of these particles doesn't violate the law of the conservation of matter or energy - because they have no mass and because the energy release by one virtual particle is cancelled out by the anti-energy released by a virtual anti-particle.

He posits that at the beginning of the universe particles were packed densely until the universe expanded rapidly in those first fractions of a second. The theory is based upon the difference between the calculated and observed amounts of so-called dark energy in the universe.

More than just a scientific discourse, the book is a philosophical look at what nothing means. The objects we handle on a daily basis all feel solid to us - but there is more "nothingness" than matter. Most of an atom is empty space. But inside this empty space virtual particles come and go with impunity.

People ask us what we're doing all the time. Quite often the answer we give is "nothing." But even in our doing "nothing," there is plenty going on. So it is with the world on a subatomic level.

Most interesting is his retort to the creationists. Those who don't believe that the universe could have formed from nothing point to the hand of God as the prime mover of the universe's creation. To them, Mr. Krauss asks where did God come from?

Email ThisBlogThis!Share to TwitterShare to FacebookShare to Pinterest
Labels: science

A Universe from Nothing is such an interesting book! I appreciate this master piece and I believe that it will touch millions of lives, my court reporting agency has a copy of this book as well and they liked it.

"Most interesting is his retort to the creationists. Those who don't believe that the universe could have formed from nothing point to the hand of God as the prime mover of the universe's creation. To them, Mr. Krauss asks where did God come from?"
The question "Where did God come from?" has already been answered in the following link:
http://scigod.com/index.php/sgj/article/view/76