Book review: The Operators - The Wild and Terrifying Inside Story of America's War in Afghanistan 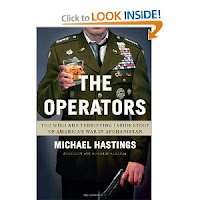 It's America's longest running war. It's the war that most folks have either forgotten about or never paid attention to. It's our turn to get stuck in a quagmire that has gotten the best of the British and the Soviets before us. It's the never-ending war in Afghanistan.

Michael Hastings' new book The Operators gives us an up close and personal view of the people responsible for it. On assignment for Rolling Stone, Mr. Hastings was sent to do a feature article on General Stanley McChrystal, the commanding general of US and NATO forces in Afghanistan.

McChrystal had just been named as the replacement for General David McKiernan and he was being treated as a rock star by the media. He carefully cultivated an image of himself as a dedicated patriot who was willing to do what it took to win the war.

It's the old "hearts and minds" argument.

Now while there's a good amount of truth behind the general idea, the problem is insurgencies surface when governments become corrupt and oppressive. And no amount of sugar-coating or whitewashing the fences can change that. It also means that we're getting caught up in yet another country's civil war. And for what?

In his travels with General McChrystal, Mr. Hastings observed, shall we say, quite a bit of questionable behavior.  He also witnessed the utter contempt in which the general held President Obama. He gives us a portrait of a man, and his inner circle, who did their best to short-circuit civilian control of the military. No matter how much General McChrystal disliked it, his boss is the President. He finally understood the dynamic when he was forced to resign his position.

Mr. Hastings also points out the complicity of the media in the war effort. Instead of acting as a check upon the government, the media were cheerleaders for the Pentagon. Correspondents wanted to be "embedded" with combat units. They wanted interviews with the top brass. They wanted access and they wanted publicity. And they were willing to sell their credibility to get it.

The media was critical of the Johnson and Nixon administrations during the Vietnam War. Beginning with the first Gulf War, the media have been acting as the unofficial public relations firm for the Pentagon. There is very little criticism of the war effort. There is little critical analysis of what's happening on the ground. There is certainly no questioning of the purpose of the war.

Mr. Hastings provides us with a more balanced view of what's really going on in Afghanistan. He is willing to question the rationale for the war. As we begin our second decade fighting a war without purpose, Mr. Hastings' book is a breath of fresh air and perspective.
Posted by Paul B. Kennedy at 8:00 AM