Astros at the quarter-pole

We are now a quarter of the way through the 2013 major league baseball season and the Houston Astros are stinking up the joint even worse than expected. Somewhat unexpected is the number of times that new owner Jim Crane has stepped in it. 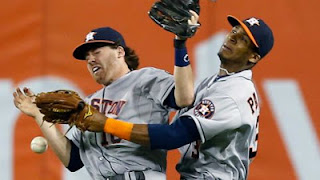 First it was his dynamic pricing model. Then he jumped on the fans because they wanted to spend his money on better players. And then, just this past week, he axed the Astros Wives' charity gala.

As an aside, after seeing the Astros blow a 4-2 eighth inning lead in Bad News Bears's style last night, I was struck by manager Bo Porter's decision to put Hector Ambriz on the mound in relief. I mean, what could possibly go wrong when you trot out a relief pitcher who puts on an average of almost two runners an inning?

Through 22 homes dates thus far, the Astros rank 26th in attendance. Minute Maid Park holds around 43,000 people - to date the Astros are averaging 19,445 per game. And that's tickets sold, not fannies in the seats.

That tells me that Crane's dynamic pricing scheme isn't working. The idea (at one point) was that ticket prices in certain sections of the stadium would fluctuate according to demand. Theoretically, when overall attendance is down ticket prices would go down and vice versa.

Under the Crane model prices never go down. As I've written before, the Crane model charges fans based on who the Astros are playing. When the Yankees and Red Sox come to town ticket prices go way up. They go up a little bit when the Rangers come to Houston. But prices never fall below the face value for anybody else. Take a look at those attendance numbers and you can figure out what's wrong with the Crane plan.

Going forward the national television deals will net each club over $40 million. That figure doesn't include local television and radio rights. It also doesn't include stadium revenue. Crane can make a fortune if he can trot out a team with a payroll under $30 million. And I wager that's what he intends to do.

So, my advice to everyone who likes baseball is to come out to see Bud Norris and Jose Altuve play because chances are neither will be with the team by the end of the season. Don't say you haven't been warned.
Posted by Paul B. Kennedy at 8:00 AM