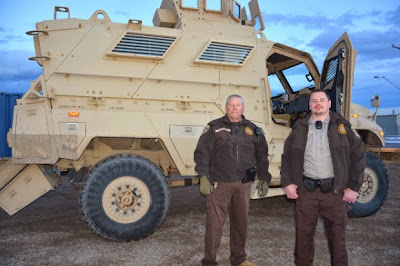 But the relative absence of crime certainly didn't stand in the way of three sheriffs getting together and buying a Mine Resistant Ambush Protected armored vehicle. According to the Casper Star-Tribune, the MRAP is just another way in which law enforcement is keeping the public safe.

Big Horn County Sheriff's Office deputies traveled to Ft. Lewis, Wash., and drove it back. The cost of the vehicle as well as the cost to maintain it is going to be shared by the three counties.

"That's the only cost we incurred," Rakness said.

The reasoning behind getting the armored vehicle is because of the state being so isolated, especially in these three counties, he said.

"We have to have it to nab the bad guys," Rakness said. "It's our hope we never have to use it. But it's free and we believe the taxpayers are getting some money back they invested in equipment."

Nabbing the bad guys. That's what it's all about. Sheriff Rakness brought up a shooting in Big Horn County from back in 1996 to justify the acquisition. I dare say that if you're having to go back 17 years to find an incident to justify the purchase of an armored vehicle you're reaching. Really reaching.

There are a couple of problems with police departments acquiring surplus military gear. First, the police aren't the military. The role of law enforcement is very different than the role of the military. Law enforcement is supposed to protect and serve the residents of a city, town or county while the job of the military is to kill people and destroy things. The police and residents aren't enemies. For the military, if you're not wearing the same uniform, you are the enemy. When police adopt military tactics they take this "us against them" attitude with them on the street. That attitude leads to routine events being escalated because someone didn't ask "how high?" when the officer told them to jump.

Second, these vehicles were designed with one purpose in mind - get troops safely into a place where they can kill anything that moves without fear of getting shot in return. I doubt you're going to find too many IED (improvised explosive devices) along the highway in Wyoming. One finger is probably one too many to count the number of mines that have been planted on the roads up there.

Third, once you've got your armored vehicle you have to use it to justify the expense of keeping it sitting around. I mean, if you're not going to use it, it's pretty damn silly to have out in the parking lot. Just having an MRAP around is going to encourage the police to find ways to use it. Military equipment has a funny way of finding itself being used in routine drug raids or when executing a search warrant.

Acquisitions of armored vehicles and surplus military gear shouldn't be fawned over by the press or the public. Such acquisitions should, instead, be questioned by all of us. As we continue the militarization of our police forces we create more and more of a siege mentality. This trend is dangerous and leads us further down the road toward a police state.
Posted by Paul B. Kennedy at 7:00 AM

Land of the Free or Big Brother's Police State?