The Mack Brown era at Texas is officially over. Regardless of the fact I think Mack should still be the coach of the Longhorns - after the BYU and Ole Miss losses it was all but a foregone conclusion that he was out after the season. 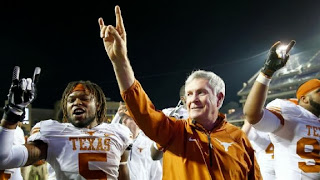 Through it all Mack showed far more class than any of his detractors showed. Just think about this for a second, one or more regents contacted Nicky Satan's agent last January while Mack was still under contract. And then someone felt the need to let the press know about it after the BYU loss.

During the entire season you've never heard Mack get cross with anyone when being asked about his status. His focus has been on the team. He never badmouthed anyone in public and never called out his detractors while the team was in the midst of their six game winning streak. Instead of being negative and bitter about what was going on around him, Mack Brown kept on his game face and pushed his team on one day at a time.

Mack made the decision to step down because he saw fractures developing in the football program and knew that if he came back for a 17th season there would be open rebellion. His decision allows time for supporters of the football team to come back together - at least until the selection is made.

There are a lot of folks who have forgotten the state of the football program when Mack came aboard. After Darrell Royal left after the 1976 season the Longhorns were in the mix for two national titles over the next 20+ seasons. In 1977 the Longhorns, ranked number one at the time, were routed by Notre Dame in the Cotton Bowl and, a few years later, lost to Georgia in the Cotton Bowl and blew their shot at (at least) a share of the national title. That was it until Mack Brown came to the Forty Acres.

The Fred Akers era ended in a nasty way. The team was irrelevant on the national stage. The years under David McWilliams were even worse. Then there was John Mackovic who, while introducing offensive innovations, never seemed to feel comfortable as the Texas coach.

Under Mack Brown the Longhorns won one national title, played for another (and who knows what might have been had Colt McCoy not been injured in the first quarter) and came within a game of playing for the title on two other occasions. No, two Big XII championships in 16 years wasn't satisfactory. But, Texas was relevant again.

The stadium was renovated and expanded to seat over 102, 000. The game day atmosphere in Austin is light-years ahead of what it was in the 1980's. UT's athletic department is the most profitable athletic department in the nation. The revenue from the Longhorn Network covers (or damn near covers) the cost of scholarships for non-revenue sports.

While the program has hit a rough skid, let's not forget that the Longhorns were but 30 minutes away from a conference title and a berth in the Fiesta Bowl this season - despite the horrid beginning of the season.

The road is littered with programs who forced out coaches the boosters didn't think were winning enough and found out, too late, that they made the wrong decision. For the sake of the program, I hope Texas didn't just make a similar mistake.

Thank you, Mack, for what you've done for the University of Texas.