Tonight the Texas killing machine is back in action...

ROBERT JENNINGS. Sentenced to death for the 1988 shooting of a Houston Police vice officer at an adult bookstore, Mr. Jennings was on parole at the time of the killing. Witnesses said the vice officer was arresting a bookstore clerk for showing movies without a license. Just then, Mr. Jennings walked in with the intention of robbing the place, saw the officer and opened fire. Mr. Jennings' attorneys questioned, among other things, whether proper instructions were given to the jury during the punishment phase of the trial.

On this MLK Day, perhaps it's time we took a step back and re-examine some issues. First, to all the Republicans and other conservatives that love taking phrases from King's speeches and writings out of context to promote their own political philosophy -- stop it! When Mike Pence gets up and quotes MLK and then goes into a tirade as to why a wall on the southern border is needed, he is being more than intellectually dishonest.

For those of y'all too young to remember, conservatives (regardless of their party affiliation) were strongly opposed to Dr. King's message. They were opposed to the black students who sat down at lunch counters across the South. That was rabble rousing, they would say. They disapproved of marches and protests. They blamed it on those damn radicals. They fought school desegregation and found new ways to perpetuate it in the suburbs thanks to white flight. Mainstream liberals went off the rails when Dr. King came out against the Vietnam War.

To have someone as reprehensible as Mike Pence whitewashing the words of Dr. King makes me sick. To use the words as a justification for a program that would promote further discrimination against Latinos angers me.

But all the white conservatives will pipe up about non-violence - even though the police continue to shoot unarmed black men and women across this country. They will talk about our colorblind society - even though we have a criminal (in)justice system that discriminates against the poor and people of color.

And, at the same time, they will continue to support the NFL's blackballing of Colin Kaepernick for the outrageous "sin" of protesting against police violence against black folk. His protest was peaceful. Yet somehow he can't find a spot as a quarterback even while teams are signing players who can't hold a candle to his achievements or potential.

Thanks to the climate of hatred whipped up by political leaders in the 50's and 60's, Dr. King was struck down by an assassin's bullet at the age of 39. He was silenced because he spoke out.

And sadly, because we live in a country that worships capitalism and consumerism like religions, his memory has been largely commodified and used as a reason for yet another sale.
Posted by Paul B. Kennedy at 12:19 PM 2 comments:

On Monday, the Court of Criminal Appeals stayed the execution of Blaine Milam. The Court granted the stay due to questions on about the reliability of bite mark evidence and to determine whether Mr. Milam's intellectual disability makes him ineligible for execution.

Monday's stay is the first since death penalty opponent Elsa Alcala left the bench. Her replacement, the newly elected Michelle Slaughter, along with Sharon "Killer" Keller and Kevin Yeary, voted against the stay.

Somehow it's no surprise that Judge Slaughter, whose only apparent qualification for the Court would seem to be the R after her name, has already cozied up to Judge Keller who is best known for closing the clerk's office to prevent an appeal from being filed in a death penalty case. Judge Slaughter's claim to fame is being required to take a class on the ethical use of social media after she commented about an ongoing case on social media. A mistrial was declared and the defendant was later acquitted.
Posted by Paul B. Kennedy at 8:00 AM No comments:

On Tuesday night, the State of Texas will take another life...

BLAINE MILAM. Was he in drug-induced psychosis when a child died during a so-called exorcism Mr. Milam was involved in? That's what his lawyers say, but they have yet to convince a court that he shouldn't be put to death, and that's what the state intends to do. The appellate attorneys raised claims of prosecutorial misconduct, as well as bad lawyering. They said his trial attorneys failed to present evidence of Mr. Milam's meth habit and his drug-altered state of mind at the time of the slaying. The information might have led to a lesser sentence. Mr. Milam's girlfriend, the mother of the victim, is serving a sentence of life without parole.

Throwing in the towel (finally) 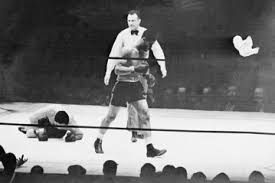 Yesterday the lawsuit filed by the former Republican misdemeanor judges was dismissed on a motion filed by the 15 incoming Democratic judges. Judge Darrell Jordan was never a part of the original lawsuit - he was later joined in his opposition by Mike Fields, the former judge in Court 14.

The dismissal of the suit means that Harris County elected officials will stop wasting taxpayer money defending an unconstitutional bail system. The outgoing judges fought tooth and nail to walk back US District Judge Lee Rosenthal's order. They knew that the leverage the courts had over indigent defendants was based on a bail system designed to keep them behind bars.

This system insured that indigent defendants would jump at the opportunity to dispose of their cases for a guilty plea and time served. Court-appointed counsel were only too willing to go along with this charade of justice - lest they piss off the court that was paying them.

The result was a plea mill. Defendants would be led into the courtroom like a chain gang and would stand in front of the judge. The judge would spend no more than a minute or two on each case and the chain gang would be led back into the holdover.

Those days are now in the past. Defendants who couldn't afford to post bond in the past will now be released on personal bonds and will be able to assist in their defense. They will be able to sleep in their own beds, see their families and go to their jobs.

No longer will a misdemeanor defendant have to make that agonizing decision on whether to fight his case or cop a plea to get out of jail.

A tip of my hat to the new judges who made this happen.
Posted by Paul B. Kennedy at 8:00 AM No comments:

Are the ejector marks from a handgun unique?

How many handguns would you have to fire in order to make that conclusion?

Back in 1999 the BATFE (known then as the ATF) created the National Integrated Ballistics Information Network (NIBIN), a database of high resolution images of bullet casings. The database was used by forensic examiners to testify at trial regarding the likelihood of a particular gun being used in a crime. Thanks to the Department of Justice, local police departments now have access to the database for use in investigating gun crimes.

But has anyone bothered to verify that the assumption that every gun leaves a unique mark on a bullet casing accurate?

This is the problem we run into with every new "forensic tool" created by law enforcement. We've seen it with tire tread analysis, bullet composition, bite mark evidence, and others. A forensic "scientist" comes up with a theory - and without checking it using the scientific method - declares that this new tool will allow the police to catch the bad guys.

But what tends to happen is the police take whatever "evidence" they uncover and use it subjectively to create a narrative that their leading suspect is the bad guy - even if it leads them in the completely wrong direction.

If you've read The Cadaver King and the Country Dentist by Radley Balko and Tucker Carrington then you know where I'm headed. If you haven't read it, then stop what you're doing right now and get the book. In many investigations the police hone in on the person they think is the most likely culprit - often on little more than a hunch. They look for evidence that points to their suspect and ignore evidence that contradicts their narrative (one of the reasons that Brady material is withheld from defense attorneys). And if the narrative makes little or no sense, they bring in a forensic examiner who will gladly resort to pseudo-scientific methods to create evidence pinning the blame on the guy the police were looking at in the first place.

Just think about it, soon the local authorities will take a bullet casing and will compare the marks on it to the NIBIN database. As soon as the algorithm matches the bullet casing the police recovered with an image in the database, the police will go after the owner of that gun -- never once questioning the assumption that no other gun would leave the same mark.


In 2013 a Mississippi man's life was spared hours before his scheduled execution after the FBI said experts had overstated the science. In a note sent to the district attorney in that case, the bureau clarified that "the science regarding firearms examinations does not permit examiner testimony that a specific gun fired a specific bullet to the exclusion of all other guns in the world."

Should the case go to trial the court, which long ago ceded its gatekeeping role with regard to scientific evidence will allow the gun examiner to testify to the unique characteristics of the ejector marks without once questioning whether there is any science behind the assertion. Of course this might work out differently in civil court where judges are only too happy to exclude any new scientific evidence that might result in insurance companies having to pay off claims.

Every new forensic tool (for lack of a better phrase) wants to portray itself as some type of a "fngerprint" since we have all bought into the assumption that our fingerprints are unique. While fingerprints and DNA profiles may very well be unique to an individual, there is little or no evidence that anything else is. Tire treads and shoe soles might have unique wear patterns, but the surface in which the imprint is left and the means by which that imprint is transferred to the surface make the analysis anything but precise.

Just remember what they say about assumptions.
Posted by Paul B. Kennedy at 8:05 AM No comments: