What we can learn from twelve mighty orphans 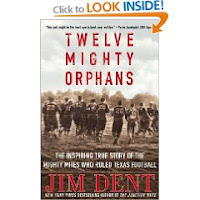 I just got finished reading Twelve Mighty Orphans by Jim Dent which was a birthday present from my brother-in-law and his wife. The book focuses on the coach, Rusty Russell, and the boys who made up the football team for the Masonic Home in Fort Worth in the 1930's and 40's.

The Masonic Home was an orphanage for children whose father's had been in the Masonic Lodge. A number of students were sent to the home after their fathers died -- and their mothers couldn't afford to raise them.


Russell had been a coach at Temple High School, a football power, until he decided to give it all up to create a football program at the Masonic Home. He never had more than twelve players, suited in hand-me-down uniforms, for the varsity team at any time. He drove the team to their away games in an old flatbed truck that was always on the verge of giving out.


But Russell and his band of orphans soon ruled Texas high school football. Despite being outweighed and outmanned every week they won a state co-championship in 1932 and advanced deep into the playoffs several other times in the 1930's.


The book climaxes with the Masonic Home playing powerhouse Amarillo in the state semifinals in 1940. Unlike fairy tales, the Mighty Mites quest for a state title died just a couple of feet short of the goal line.


The Mighty Mites were the darlings of Texans during the years of the Great Depression. They defied the odds for almost a decade and were everyone's favorite underdogs.


Why am I writing about this book? Because I think it goes to the heart of what we, as criminal defense lawyers, do. We are the underdog. We have to scrape and claw everyday in that courtroom and we have to fight for every inch at trial.


Coach Russell was successful because he believed in his players and refused to accept anything but their best effort. We must believe in our clients' causes -- those precious constitutional rights that our opponents label as "technicalities." We must never be satisfied with anything less than our best effort.
Posted by Paul B. Kennedy at 10:45 PM