Convicted felon to resign from bench - next year 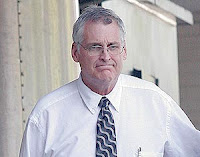 US District Judge, and convicted felon, Samuel Kent notified President Obama of his resignation from the bench on June 1, 2010.
That's right. The disgraced judge who was sentenced to 33 months in federal prison refuses to relinquish his seat until this time next year in order to collect another $174,000 and his health benefits for the next twelve months.
Meanwhile, the US House continues to prepare for impeachment proceedings against Mr. Kent.
Said Mr. Kent's attorney, Dick DeGuerin "If they want to continue with the impeachment hearings, you'll know that they're doing it just for the publicity value. It's going to be brutal, it's going to be ugly and it's going to be nasty and there's no reason to do it."
No reason, except it's absurd that a convicted felon who disgraced his bench is still collecting his salary from the taxpayers.
Posted by Paul B. Kennedy at 1:04 PM