As we wind down the old year and get ready to crank up the new one, the people in Afghanistan are still trying to extricate themselves from the nightmare that was the Taliban regime. And part of that transformation is taking place inside a soccer stadium.

Ghazi Stadium in Kabul is to be the home of the Afghanistan national soccer team.

During the days of the Taliban, Ghazi Stadium was where the regime carried out public executions. 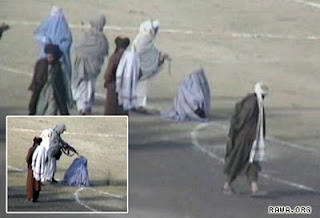 Daud, 40, a driver who only wanted to give his first name, was at the stadium in 1999 when he witnessed the execution of a woman called Zarmeena, who was accused of killing her husband.

Dressed in a blue burqa, she was made to kneel on the field.

"The Taliban got the Kalashnikov, put it behind her head and shot her two times. She fell down on the ground," Daud said. "The crowd went very quiet. It was a strange and dangerous atmosphere. People were shocked and scared. Sometimes I remember that woman — I even dream about it."

But he said he hoped that the stadium, once dirty and littered with bullets, now would be a symbol of hope in the country

"Now the stadium is 100 percent changed," he said.


Sports can divide us, but they can also bring us together. Although the reopening of the stadium is more symbolic than tangible, it is a sign that normalcy may be returning to the country.