Book review: The End of War - how waging peace can save humanity, our planet and our future

Paul K. Chappell's latest book, The End of War, isn't on the newly released list - but I just found out about it a couple of weeks ago. And, although I may be late to the party, the wait was well worth it. 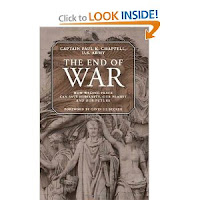 Mr. Chappell was a captain in the US Army so his is a very intriguing look at the causes of war and the ways we can avoid war in the future. As Mr. Chappell sees it, peace activists and soldiers have a lot more in common that you would think - they both want peace and an end to war. Those striking the drums of war aren't the soldiers; they're the politicians and others who have something to gain from sending young men to the deaths in other parts of the world.

War, according to Mr. Chappell, results from fear. Fear tends to provoke one of two reactions: one either runs or one displays warning aggression. Warning aggression is a way for animals, and people, to try to scare off a perceived aggressor. For instance, if you're out in the woods and you see a bear, the worst thing you can do is run. If you run, the bear will chase you down and you'll have a very serious problem on your hands. On the other hand, if you act aggressively toward the bear, the bear will leave because the bear isn't looking for a fight.

Warning aggression is what the nuclear arms race and mutually assured destruction was all about. Neither the US nor the Soviet Union ever intended to use their vast arsenals of nuclear weapons. But the existence of those arsenals prevented the other side from even thinking of launching an attack.

Address the issue of fear and you address the cause of war. If you have any doubts, just look at how politicians and some in the media instill fear in the minds of the American public while beating the drums of war.

For many animals, warning aggression ends any potential conflict. But, if an animal is backed into a corner with no escape, conflict will ensue. And that's the way in which countries get dragged into wars. When a nation has no way of backing down from a conflict - war will come.

Mr. Chappell also posits that there are three universal laws of conflict that sow the seeds of war. The first of these laws is the more complex something is, the more things there are to go wrong. Human society is very complex and our relationships with others are complex. With a multitude of political and religious beliefs, there are many ways these relationships can break down.

The second law is very similar to the concept behind chaos theory - in a complex system, one small problem can create a very big problem. As the saying goes, a butterfly flapping its wings in China can cause a hurricane in the Gulf.

But there is hope still. For, increasing understanding can overcome increasing complexity. The more we understand ourselves and our neighbors the easier it is for us to get past the two laws of complexity. The more you understand someone else, the more you realize that your differences are far smaller than your similarities. We all want three things: food, shelter and clothing. The ways we go about getting those items may differ, but our needs are all the same.

Throughout the book, Mr. Chappell makes reference to Gandhi and Martin Luther King, Jr., and their nonviolent struggles for freedom. He points out that both men taught understanding, patience and tolerance. Their goal was to transform a society, not to rip it apart. We have this perverse notion that the only way to obtain peace is through war, but, as a soldier, Mr. Chappell has seen the incredible devastation that war brings. His mission is to fight for peace without the use of violence. His "weapons" are understanding and unconditional love.

Sure, there are parts of the book that might seem pedantic and simplistic, but, if you sit down and think about what he's saying, you will come away with a greater understanding as to what fuels conflict and what we can do to end it.
Posted by Paul B. Kennedy at 7:00 AM