Book review: Up Pohnpei - A quest to reclaim the soul of football by leading the world's ultimate underdogs to glory

I was minding my own business the other day while driving around in the car. I was listening to a BBC show when they began interviewing Paul Watson, an Egnlishman, who had just written a book about going to Micronesia to coach a soccer team. It sounded like a fun story but, darn the luck, I was actually driving and couldn't grab a pen to write anything down. 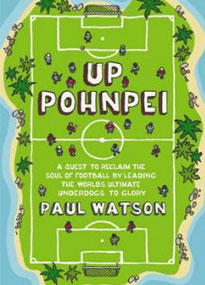 Once I had the chance I got on my phone and tried to pull the book up on Amazon or Google but I didn't catch the author's name. The name of the island sounded like "Pompey" on the radio. All I could find when I typed in Pompey and football were scores of books about the Portsmouth soccer team in England (type it in yourself and you'll find out why).

On the verge of giving up I happened to type in "Guam" and "Pompey" in the search box. And then I found my mistake. The name of the island was Pohnpei. It was back to Amazon and, a few moments later, On Pohnpei was on my smart phone.

But their dreams of playing for Pohnpei were dashed when they saw the requirements for obtaining citizenship. So, instead of playing on the pitch, the mates decide to coach.

On the one hand, On Pohnpei is the story of a determined man trying to build something from nothing. He organized a football league on the island consisting of five teams. From those five teams he assembled a national team. The book chronicles the challenges he faced in getting his team ready to play competitive football. It's an inspirational story that makes you believe that if you want something bad enough, you can achieve it.

On the other hand, On Pohnpei is a story of imperialism. Both political and cultural. Pohnpei is poor and, with very few prospects, its best and brightest flee for the opportunities offered elsewhere. Mr. Watson is the hero in white who comes to rescue the backward islanders. If the natives will just listen to the interloper, he will deliver them into paradise.

I go back and forth. I enjoyed the book and it was quite refreshing to view the world of football from outside the prism of the European game.
Posted by Paul B. Kennedy at 7:00 AM

Email ThisBlogThis!Share to TwitterShare to FacebookShare to Pinterest
Labels: soccer

Pohnpei may be poor in your book but it's is one of the most living examples of modern conservation with the aspect of the Tuna industry. They are one of the only view countries in the world that only need a passport to live in united state and most develop countries..people there are multi-talented with most importantly education mental first then sport come afterwards. It holds many ruins dating back to 300 bc civilization...comparing the pyramids civilization far beyond advance.anyhow,you should be able to do more research then just post your inaduquated state of mind about that Island. Check CIA fact sheets further recommendations.