It's traditional in baseball lore that whoever led their league on Memorial Day was the odds-on favorite to win the pennant come October.  Of course with the split into divisions and the additions of wild card teams, it just means that whoever's leading their division on Memorial Day has a pretty good shot at winning the division and getting into the playoffs. 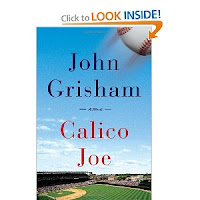 And, given that baseball is so entwined with both Memorial Day and the Fourth of July, it only seems appropriate to review two books about America's pastime today.

I'm not much of a fan of John Grisham. Now, I've been to Oxford, Mississippi and it's a wonder what he has done to transform that sleepy town with some of the wealth he's accumulated from writing his formulaic lawyer books. A few weeks ago I was listening to Fresh Air or Weekend Edition or one of the other interview programs on NPR and heard someone talking about how he grew up in the South as a St. Louis Cardinals fan thanks to the powerful signal of the mighty KMOX. In fact, I remember picking up both Cardinals baseball games and Blues hockey games on my clock radio if the clouds were aligned just right late at night.

The interview was fascinating and then I realized the person being interviewed was John Grisham and they were talking about his latest book, Calico Joe.

"Calico Joe" Cannon was called up by the Chicago Cubs after an injury to their starting first baseman. From the first pitcher in the bigs he faced, Cannon was unstoppable. That is until he stepped into the batter's box against journeyman pitcher Warren Tracey of the New York Mets.

The story is told from the point of view of Warren's son, Paul and it's a journey of both discovery and redemption. Mr. Grisham could have turned maudlin and brought father and son back together with the elder Tracey dying of cancer. But he didn't. While the exploits of Calico Joe strain belief, the story is compelling and, if you love baseball, you won't be able to put it down.

The second book of today's doubleheader is Chad Harbach's debut, The Art of Fielding. 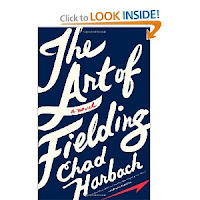 Henry Skrimshander was a scrawny shortstop playing American Legion ball when Mike Schwartz, the catcher for the Westish Harpooners, a Division III team, watches him field grounders after a ball game. Schultz convinces Henry to enroll at Westish and play ball.

Henry is an unstoppable force until a tragic accident in a game. From that point forward he loses the ability just to play and react and begins to think too much about what he's doing and, as a result, becomes paralyzed in indecision.

The tragedy of that afternoon ties Henry, his roommate Owen, the university president, Guert Affenlighter, the president's daughter and Schwartz together in ways you never thought imaginable. While the core message of the book - that thinking too much can paralyze you - rings true, there are some serious missteps along the way that don't seem in the least bit credible.

However, despite those stretches, The Art of Fielding is hard to put down.
Posted by Paul B. Kennedy at 7:00 AM