The heads of major corporations always profess their allegiance to the laws of capitalism. They claim they want less government regulation since all that red tape only drives up the price of production. They want greater freedom to pay workers what they want without the government looking over their shoulders. They want those pesky little environmental officials to go away because it costs money to privatize the cost of pollution rather than socialize the cost like they've always done. 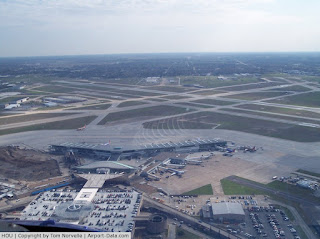 There are two major airports in Houston - Intercontinental (I refuse to call it Bush) on the north side and Hobby on the south side. United has one of its main hubs at Intercontinental - after acquiring Continental and its terminals and gates. Southwest is the top dog down at Hobby. 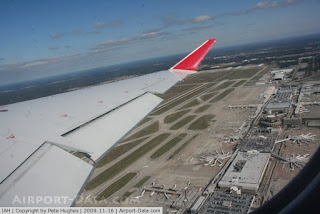 Over the past few years Southwest has made a handful of acquisitions, including some carriers with flights to Mexico and the Caribbean. These are Southwest's first foray into international travel. But flying those routes out of Houston would require that an international terminal be built at Hobby.

United, on the other hand, is now a fan of government interference in the marketplace and is arguing that one international terminal in Houston is enough. For, you see, if Southwest were to start flying to Mexico out of Hobby then folks might choose to fly Southwest over United if the fares were lower. If that were to happen then United wouldn't make as much money on those flights out of Houston and might have to cut back on the number of international flights and flights bringing passengers to the Houston hub.

I’ve struggled to understand it myself. Here’s an example of how it works that United provided for me, which I’ve edited for brevity. It is an argument that a passenger flying out of Hobby rather than Bush Intercontinental (IAH) affects other IAH flights.

A flight from Hobby to Mexico City could divert a number of local and connecting passengers away from  IAH flights to Mexico City.  This then makes one of our IAH flights to Mexico City fall into unprofitability, and we cancel it.  Onboard that canceled Mexico City flight were passengers who were connecting from Tucson and Phoenix, among dozens of other points.  Given that that Mexico City flight no longer exists, we lose those passengers from the Tucson and Phoenix flights, thus rendering some of those Tucson and Phoenix flights unprofitable and subject to cancellation.  This progresses into a cascade that results in many flights being canceled, because those flights carry customers who may want to connect from IAH to London or Amsterdam or Auckland, so there are fewer passengers connecting at IAH for those flights, making them unprofitable.  Hubs are fragile. They need the “feed” to continue to grow.  When the feed stops, they shrink and the airport becomes weaker.


In other words, United is telling the government to save it from competition and to keep air fares artificially high.