(a) Offense.— Whoever outside the United States commits or attempts to commit torture shall be fined under this title or imprisoned not more than 20 years, or both, and if death results to any person from conduct prohibited by this subsection, shall be punished by death or imprisoned for any term of years or for life.(b) Jurisdiction.— There is jurisdiction over the activity prohibited in subsection (a) if—(1) the alleged offender is a national of the United States; or
(2) the alleged offender is present in the United States, irrespective of the nationality of the victim or alleged offender.
(c) Conspiracy.— A person who conspires to commit an offense under this section shall be subject to the same penalties (other than the penalty of death) as the penalties prescribed for the offense, the commission of which was the object of the conspiracy.


First off I need to make a little disclaimer. Up to now all of the books I've reviewed on this blog were purchased by yours truly. If I thought a book sounded interesting, I'd buy it and, if I found it interesting, I'd write a review. 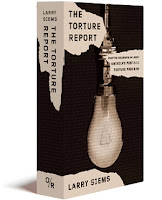 Today's book, The Torture Report by Larry Siems, is an exception. After a recent review someone from O/R Books sent me an email asking if I'd be interested in reviewing The Torture Report. Not being one to turn down a free book, I said yes.

Larry Siems is the director of PEN American Center's Freedom to Write. He wrote The Torture Room based on over 140,000 declassified government documents that paint a chilling picture of how the Bush Administration decided that international law banning the use of torture didn't apply to the United States. While reading the book I had to resist the temptation to throw the book across the room because what I was reading made me so angry.

The Geneva Convention forbids the use of torture on prisoners of war. US law prohibits the use of torture if the alleged torture takes place in the United States or is committed by a US citizen. But, somehow, John Yoo, President Bush's lackey, came to the conclusion that neither the Geneva Convention nor US law applied if the victims of the torture were "enemy combatants" of the United States' never-ending war on terrorism.

He also relied upon 18 USC 2340's definition of "torture." According to the statute:


“torture” means an act committed by a person acting under the color of law specifically intended to inflict severe physical or mental pain or suffering (other than pain or suffering incidental to lawful sanctions) upon another person within his custody or physical control...

To Mr. Yoo's way of thinking, since the purpose of the interrogation methods was to extract information rather than just to inflict several physical or mental pain and suffering, that none of the outlined methods constituted torture.

And W? Well he just ate that shit up. He admitted in his autobiography that he gave the orders to torture suspected al-Qaeda members in secret prisons around the world, to turn them over to regimes that routinely tortured their own citizens and to torture them in US military complexes both here and abroad.

The book contains diaries and log entries that recite the various methods of torture used by US military personnel in violation of the Uniform Code of Military Justice. There are a few people here and there who took a stand in opposition to the White House's illegal interrogation methods - but there are more people who just stood by and either did nothing and personally carried out the orders.

And the Bush Administration aren't the only villains in this story. Congress played a big role in allowing the illegal interrogations to continue. Scared of being painted as soft on terrorism (or whatever the hell the Bush Administration called its critics), senators and representatives fell over themselves in supporting the president.

The detainees were held (and are still being held) for years in a foreign country without any contact with friends or relatives. They were held without being charged. They were subjected to torture. They were denied habeas relief. They were to be tried before military tribunals without being allowed to see the evidence the US intended to use against them and without due process of law.

President Obama had the opportunity to show the world that the US stands for right. But, instead of having President Bush and his co-conspirators defend themselves against charges of torture and conspiracy to commit torture, he took the easy way out and did nothing. Instead of carrying out his duty to see that the laws of the United States are carried out, he turned a blind eye to the actions of a former president who thought he was above the law. Through his inaction, President Obama is every bit as complicit as George Bush in the horrific acts that were carried out in this nation's name.
Posted by Paul B. Kennedy at 7:00 AM