Book review: Rise of the Warrior Cop - The militarization of America's police forces

In Rise of the Warrior Cop, Radley Balko takes a look at the current state of policing in these United States and asks "how did we get here?" 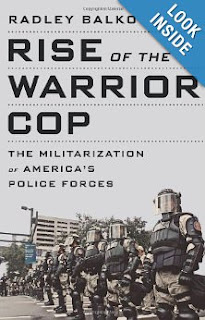 How did we come to a point in which police officers wear camouflage gear, carry assault-type weapons and raid houses in tanks? When did the police move from being a part of the community to being an occupation force within the community?

He starts out asking whether there is any Constitutional authority for the police as they exist today. You see, back in the early days of the Republic, there was no organized police force. Yes, there were constables who served process and sheriffs who might raise a posse of able-bodied men; but there were no police departments. And there certainly weren't professional police officers who dressed and acted like soldiers.

Mr. Balko points to the Castle Doctrine and the Third Amendment as two ideas that served to limit the authority of the police. The simplest way to look at the Castle Doctrine is to think of one's home as being inviolate. If the government wants inside your house, they must obtain a warrant from a judge after showing probable cause to believe you are breaking the law. The Third Amendment is a companion notion that says the government can't force you to allow troops to stay in your house or on your property. Oh, but such ideas do get in the way of the government getting its nose all up in your business. And the Right was ready to do something about in 1969.

The origins of the paramilitary forces that patrol our cities trace back to President Nixon and the first so-called War on Drugs. Nixon's proposals to legalize no-knock raids (up that point, with rare exception, when executing a warrant, the police had to knock and announce themselves and give the folks inside the house time to respond) and to suspend bail and suspended sentences marked the beginning of a decades long march to the occupation of our inner cities.

Mr. Balko chronicles the rise of SWAT units throughout the country as well as government garage sales of surplus military equipment to local law enforcement agencies. Much more disturbing is a look at how the police use force and intimidation to serve warrants in drug cases. Why go through the effort of tracking the suspect and arresting him outside his home when you can send in a tank full of paramilitaries to knock down the door, point guns indiscriminately and shoot the family pet all in the name of confiscating a few ounces of marijuana or cocaine? Of course doing some homework - rather than just relying on the words of informants - might prevent the police from busting down the wrong door and scaring the shit out of the wrong family.

We have seen the use of paramilitary police units to quell dissent at international conferences and national political party conventions. And who could ever forget the image of a Cal-Davis police officer wearing full riot gear discharging pepper spray in the faces of college students who were doing nothing more than sitting in front of an administration building during a protest?

We have allowed the occupation of America to thrive over the past four decades. It is time to stop the rising militarization of our law enforcement agencies. It won't be easy to undo what's been built up since the Nixon days but if we don't start now we will reach a point where it's too late.
Posted by Paul B. Kennedy at 7:00 AM

Paul, we both know that the two most important things to the law enforcement (their definition of success for their trade) is taking any and all measures (both necessary and unnecessary) to physically survive ones duty shift and accumulate as many scalps (arrests and tickets) as possible. The first reason is the rationale that because the police work among an armed population (as opposed to England) that they need to be the most physically powerful among the public to maintain authority. This "might makes right" logic is corrupted by paranoia as police believe that anyone and everyone is a potentially dangerous criminal defendant as opposed to citizens going about their own business. The reality is that the public deals with violence on remote basis and that most firearm owners are responsible citizens. When the rare occasion of a psycho serial killer, mentally unstable public shooter and the death of a police officer does happen they make front page headlines (because violence, sex and money are always the headlines that sell the best) the paranoia poisons more fear into both the public and law enforcement. Police administration have been sold into believing that the only way to combat what they perceive could be potentially dangerous criminals is by bringing down upon them greater firepower, force, intimidation and violence under the illusion that respect will follow. The result has been a small but growing arms race initiated by police departments that serves only to corrupt public safety. The other reason for this cycle is just as self interested. Police brass are prohibited from having any specific quotas so their solution around that is to simply promote or payraise only their top salesmen (the officer with the most scalps). This creates the maybe even a larger problem that the quotas would have as police officers are provided with personal incentive to compete with one another by accumulating the most scalps and pursuing only those legal violations which are most likely to be fruitful. The result of this model has been that competition has replaced the priority of public safety as there is no shortage of laws to violate or people to violate. This competition in concert with overcriminalization results in the people of the community not something to be protected but instead potential criminal cases that should be arrested before the competition gets to the person. Peace officers become law enforcement officers. The justification for this is that the citizen broke the law (which law makes little difference) and that the court system needs to get tougher on all these criminals. Eventually legislatures are presses (by police lobbies and those still allowed to vote) to get tougher on these criminals by imposing more laws and continuing the cycle. Unfortunately, It still remains a mystery to many of those employed by this system and the public, why the number of criminal defendants continues to increase.


My best friend, who’s a SWAT officer in Nashua, who came to Iraq with me to train the Iraqi police, sent me an email with a picture of him in the media on the streets of Watertown, MA wearing the exact same combat gear that we had in Iraq, only it was a different color. And the way we do things in the military, it’s called task organization: You take a command, and then you attach units to it in order to accomplish the mission. What’s happening is that Homeland Security is pre-staging gear, equipment, consistent: What they’re trying to do us use standardized vehicles, standardized equipment. I saw a picture in the Boston Globe during the Marathon Bombing where there was a state police officer– Actually, there were two officers. They both had identical helmets, flak jackets, weapons, everything I wore in Iraq, only it was all blue. The officer on one side had a big patch on his back that said “MASSACHUSETTS STATE POLICE.” Another officer next to him, his patch said “BOSTON POLICE.”


And so what we’re doing here, and let’s not kid about it, we’re building a domestic army and we’re shrinking the military because the government is afraid of its own citizens. The last time more than ten terrorists were in the same place at one time was September 11, and all these vehicles in the world wouldn’t have prevented it, nor would it have helped anybody. So, I don’t know where we’re going to use this many vehicles and this many troops; Concord is just one little cog in the wheel. We’re building an Army over here and I can’t believe that people aren’t seeing it. Is everybody blind?