Warriors for a new tomorrow 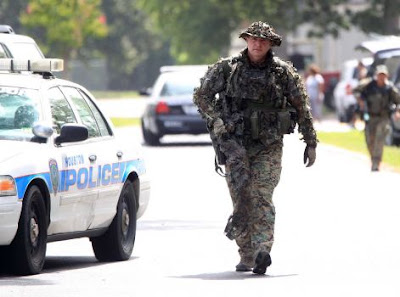 No, that's not an armed invasion of the City of Houston. It's just the latest example of the increasing militarization of the police. There is no reason a Houston police officer should be decked out in full camouflage. He's not a soldier, he is a peace officer.

The mission of a police department is to protect and serve the citizenry. It's not to dress up like a soldier and carry an automatic rifle. It's not to get behind the wheel of an armored personnel carrier. These devices and artifices serve only to separate the police more and more from the rest of us.

As I drove around the city this morning listening to the Diane Rehm show. She and her guests were discussing the latest alleged (unspecified) terrorist plot. As usual, none of Ms. Rehm's guests were from outside the mainstream of opinion. The guests might tilt a little bit to the left or right but there is never anyone on the air who would argue that the questions missed the point.

While we have seen this same scenario played out many times before, not one guest on the show cast any skepticism about the veracity of the government's claims that they had uncovered information from listening to phone calls about the alleged plot. The very notion that the Obama administration would create an alleged terror threat out of whole cloth to distract attention from the NSA's internal surveillance programs was ridiculed by Ms. Rehm and her guests.

But most disturbing was the idea that, in a digital world, we need to come to the realization that the government is going to listen in to our phone calls, read our e-mails and peruse our internet searches. Not one guest questioned the premise that our privacy rights and civil liberties need to suffer in order for Big Brother to protect us.

If you follow their logic, the Fourth Amendment is but a quaint historical relic treasured by those of us who refuse to accept the new reality.

As an aside, none of the guests questioned the right of the United States to fly unmanned drones through the air space of a sovereign nation and fire missiles at their citizens. I guess murder is murder, unless the victim speaks a different language and practices a different set of superstitious rituals - but that's an argument for another day.

And as I listened to the conversation my mind kept being drawn back to the picture of HPD officers dressed in full camouflage carrying automatic rifles walking down a city street. Somewhere along the way we got so far off-track that most of us don't even think twice about the implications of turning the police into a paramilitary squad.
Posted by Paul B. Kennedy at 7:00 AM