Do you want this man sitting on the bench? 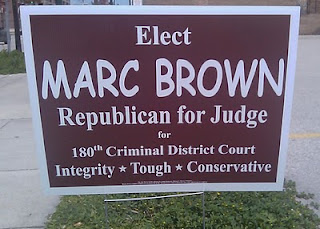 I'm going to start off by saying I don't know Marc Brown and I wouldn't recognize him if he walked right up to me and said hello. But I do know that this campaign sign is very disturbing and it makes me wonder if Mr. Brown should be sitting on a criminal bench.
I understand integrity. That's something we want from our judges. I don't want to have to stand up before a judge and wonder if I'm going to get a fair shake or if I'm behind the eight-ball because my opponent was a major campaign contributor.
Where I have problems begins with tough. What exactly does that mean? Is Mr. Brown going to hold the state to its burden and enforce the law - even if it means tossing a case because the police did something wrong? Or does it mean that he's going to be tough on criminal defendants? Being that Mr. Brown comes from the Harris County District Attorney's Office, I think it's a safe bet that he won't be deterred by that little thing called the Bill of Rights when it comes time to decide whether evidence should be suppressed.
And then there's this bit about conservative. Pardon my French, but what the hell does being conservative have to do with presiding over a court? A judge is supposed to be an impartial umpire in a factual dispute -- not that we have too many of those in Harris County, but that's beside the point.
Maybe those words are just code for "What this court needs is a prosecutor wearing a black robe."
After all, according to his website, Mr. Brown is a career prosecutor and "law enforcement's choice." What else needs to be said?
Is that who you want as judge?
Posted by Paul B. Kennedy at 4:41 PM

I have found Marc to be a very reasonable prosecutor - more so than most - for real. My concern is that he is married to Judge Susan Brown. And, we know what happened when Devon Anderson took the bench after her husband. (They had both been reasonable prosecutors; can't say the same about their jobs a judges.)

I don't think we need another judge fresh out of the DA's office. He's never defended a case and he's the darling of law enforcement. I can't think of a worse combination. There's a reason the only rule of evidence in Harris County is "if it's bad for the defense, it's admissible."

"Being that Mr. Brown comes from the Harris County District Attorney's Office, I think it's a safe bet that he won't be deterred by that little thing called the Bill of Rights when it comes time to decide whether evidence should be suppressed."

What a ridiculous comment. It is obnoxious that a man who has served the county for 20 years has to be described like this by someone who by his own admission knows nothing about him.

Maybe for a short sighted defense lawyer "tough" means only one thing, but most people who know Marc would readily agree that tough can also mean not being afraid to make the right call.

Perhaps you'd prefer the fired DA running against Marc who was totally incompetent, or the democrat who's been licensed for THREE years? If so, then you really have no business voting in the election. I am sreu Marc can get by without your support.

Thank you for your comment. Mr. Brown chose to put himself out there when he decided to run for political office.

Mr. Brown's sign didn't say "Defender of the Constitution." It said "tough" and "conservative." Pray tell what those are code words for. Somehow I'm not thinking the rabid right would go for a candidate who promised to protect the Constitutional rights of the accused.

And, if I remember correctly, I did give Mr. Brown points for "integrity."

Also, his grammar is poor. "Integrity" is a noun. "Tough" and "Conservative" are adjectives. That slogan doesn't even work.