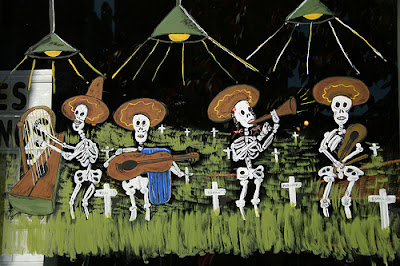 Greetings to all as Blawg Review celebrates the triple witching hour of All Saint's Day, All Soul's Day and the Day of the Dead, or, more appropriately, El Dia de los Muertos. With more and more churches proclaiming that Halloween is a glorified celebration of the devil, the origins of dressing up as ghosts and goblins has been forgotten.

Most churches in these parts have rebranded their Halloween celebrations into "Fall Festivals." The irony somehow escapes the holier-than-thou crowd. There are a few folks who have taken a plunge into the deep end of the pool.

What we now know as Halloween was originally the Celtic celebration of the end of the summer. Later on when the Christians co-opted the pagan rituals and holidays (do you really think they were out tending sheep on the night of the Winter Solstice?), the celebration was renamed All Hallow's Eve, a night in which folks dressed up to show the evil spirits they weren't afraid. Now of course it's merely a night when children learn to go door-to-door and beg strangers for candy and other worthless treats.

So I present our assorted ghosts, ghouls, demons, witches and clowns from the blawgosphere.

Edward Fallone, a professor at the Marquette University Law School, gets us started with a little bit of political satire just in time for Halloween. Some grown folk seem to be a lot like the kids who go door to door on Halloween -- they want something, they just don't want to pay for it.

If the house you bought turns out to be haunted, Ronald Burdge says there's still hope if you want to get your money back. If those ghosts are still hanging around, the seller may have violated his promise to "deliver the premises vacant."

Scott Greenfield explains why it isn't so easy being the second attorney on a case. Haggling over price is fine for the flea market and the car lot, but not when your life and reputation are on the line. I mean, it costs enough to dig up the first hole, nevermind the second.

Brian Tannebaum suggests Twitter probably isn't the best place to search for an attorney, unless you set some money aside to hire the second attorney. Apparently not everyone on the Internet is being upfront and honest about who they are, or pretend to be.

While Jamison Koehler agrees with Scott Greenfield's general premise about Twitter being an awful lot about nothing, he does find some redeeming qualities.

Of course you can always ask God for legal assistance as Mark Bennett points out. It's all about faith, brother. And, as Mark points out, if you're convicted, it's probably what the big guy upstairs wanted all along. I guess athiests need not apply.

And while we're on the subject of God, Bill Marler points out that it appears the Divine One is to blame for the Estrella Family Creamery's listeria-laced cheese. Oh, those tricky Ten Commandments rear their ugly heads again.

Steven Smith, a professor at the University of San Diego School of Law, laments the growing cultural divide among different faiths in the United States in his post from Law, Religion and Ethics. Is religion the glue that holds us together or the wall that separates us.

Jeff Gamso reminds us that we're dealing with real lives in the courtroom, not just this abstraction we call the law. Games are played with balls and sticks, not people's lives.


Talk Left highlights an interesting attack on the lethal injection drug cocktail in Arizona. When we order our lethal drugs we want them made in America, dammit! First they made radios, then it was cars and now it's lethal drug cocktails.
Anthony Graves is a free man today after spending 12 years on death row and the last four in the Burleson County jail. Grits for Breakfast calls for the disbarment of the prosecutor who failed to reveal that the only witness against Mr. Graves, the actual killer, recanted his testimony to prosecutors the night before his trial in 1994 and again in the death chamber.

Murray Newman pipes in with an ode to "tough" prosecutors. It seems that rent-a-prosecutor, Kelly Siegler, is on the warpath against Charles Sebesta, the prosecutor who screwed the pooch in the Graves case. Maybe they really do eat their own.

And what is the social cost of a wrongful conviction? The Innocence Project has the answer. For every wrongfully convicted person in prison, there's someone else who got away with it. It also means old wounds are reopened.

Judges like to issue gag orders in high profile cases, but what happens when co-defendants are tried separately? Norman Pattis tells us about attorney Jeremiah Donovan's attempt to "unpoison" the jury pool. What's an attorney to do when the people who will decide his client's fate are being exposed to every facet of the case before he ever makes an opening statement?

Rick Horowitz points out there are two systems of justice in these United States. If you can't pay the mortgage, you're irresponsible. If the bank can't pay its bills, we foot the bill.  Seems like the Gilded Age's golden rule -- he who has the gold, makes the rule.

From across the pond, CharonQC asks us if all is fair in love and war -- or at least war. When you accuse your enemy of torturing folks while you have him strapped to a waterboard, it does appear just the slightest bit hypocritical, don't you think?

The Trial Warrior wants to know if justice is a victim of friendly fire in the latest War on the Constitution against Terrorism. Sometimes I wonder if justice is even breathing these days.

Some of y'all here in the Lone Star State think partisan judicial elections are the worst thing to come down the pike since low calorie Blue Bell ice cream -- well, Gideon shows you how insane a non-contested retention election can be. Partisan elections might not be the best way of choosing judges, but it sure beats the alternatives.

The Sports Law Professor digs deep inside the mysterious NFL rulebook to explain why a catch isn't always a catch. It would appear that being hyper-specific actually creates more grey area. Maybe the NFL should have taken a lesson from the Founding Fathers.

Then there's SportsBiz on how the NCAA keeps finding itself dragged into court -- and we're not talking about the hardwoods.

Someone had a great idea for a costume down in Austin on Saturday night. He and some of his buddies dressed up in burnt orange and white and pretended to be the University of Texas football team. Wait a second, they've been wearing those costumes all year.

Want to persuade someone that you're right? Don't just quote facts and cite cases -- tell a compelling story. Douglas Keene takes a look at the power of story telling in litigation.

Wray Herbert writes about the psychology of borders.  Does that little dotted line on the map really mean anything? What might that say about the manner in which people and objects are situated in the courtroom?

Kids, thinking about setting up a pumpkin stand on the driveway? If you're in Pennsylvania or Idaho, the Tax Girl says "think again." What's next? Taxing my daughter's lemonade stand?

If it's Monday, R. Allen Stanford must have new attorneys, so say our friends at Tex Parte Blog. The game of legal musical chairs continues in downtown Houston. It's interesting how a billionaire is considered indigent while Joe Schmoe whose family posted a $500 bond at the Harris County Jail isn't.

If you're looking for pro bono opportunities, Above and Beyond KM have some resources you might find useful.

And, while we're on the topic, Jay Fleishman writes that pro bono work is a great way to market your firm and make some money. And isn't that why we all got into this racket?

Finally, since this is National Pro Bono Week, I can't think of a more appropriate way to commemorate it...

Next week's host is Stephen Albainey-Jenei at the Patent Baristas.

Blawg Review has information about next week's host, and instructions how to get your blawg posts reviewed in upcoming issues.

Thank you for the kind words. It was a pleasure putting it together.