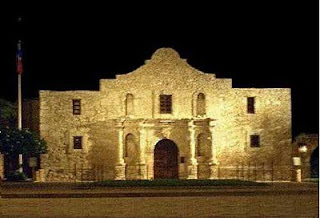 175 years ago today began the 13 days of glory that defined the Republic of Texas. On February 23, 1836, General Santa Ana's forces arrived in San Antonio de Bexar and laid siege to the mission known as the Alamo.

For thirteen days about 190 men fought off the Mexican army. On March 5, 1836, with the end in sight, Col. William Travis gathered the men together and told them if they stood their ground, they would be killed. Legend has it that Col. Travis took his sword and drew a line in the sand and asked those men who were willing to fight and die with him to cross it. As the story goes, only one man didn't cross it.

Santa Ana's army made its final assault the next morning, and by the time the sun rose, the Alamo had been taken and the defenders were all dead.

The legend of the Alamo is deeply ingrained in everyone who grew up in Texas. It remains my daughters' favorite place to go.

Fighting for the rights of the accused and standing beside them before a jury sometimes feels as hopeless as trying to defend the Alamo against a superior army. But sometimes it's the fight itself that is the victory. It was  fall of the Alamo and the death of the defenders that provided the spark that spurred on the Texans as they ultimately prevailed on the banks of the San Jacinto River.
Posted by Paul B. Kennedy at 4:57 PM

Email ThisBlogThis!Share to TwitterShare to FacebookShare to Pinterest
Labels: Texas, The Alamo