During the depths of the Great Depression capitalism faced its greatest challenge. The unfettered free market of the Gilded Age crashed and brought the economy of the United States (and western Europe) to its knees. 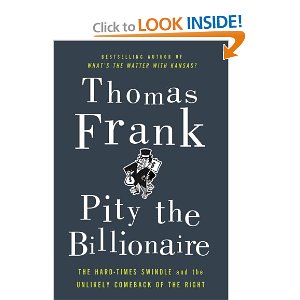 In response to the demands of the people, President Franklin Roosevelt pumped money into the economy to build schools, bridges, parks and buildings. We saw the creation of social security and unemployment compensation. Farmers formed organizations to prevent farms from being foreclosed upon. Banking reforms were enacted to prevent another banking crisis.

The Keynesian model of "priming the pump" during bad times prevailed until the late 1970's when the OPEC oil embargo threatened to bring the US economy to its knees once again. The stagnation of the Carter era paved the way for Ronald Reagan and his religion of free markets.

Over the ensuing 30 years, the reforms of the New Deal were gradually unwound and those who worshiped at the Altar of the Invisible Hand exported their ideology around the world.

And, for a time, everything seemed perfectly okay. Incomes were rising. Profits were rising. Land values were skyrocketing. CEO's were deified. And the free marketeers continued to preach their gospel of limited government interference with the economy.

One investment bank after another bit the dust. The derivatives based upon collateralized debt obligations (sub-prime mortgages) tanked. The holders of these bonds found out they were toxic. The government didn't regulate the creation and sale of this instruments. That would have been interfering with the invisible hand of the market.

Banks failed. The housing market tanked. Credit dried up. Workers lost their jobs. People lost their homes. President Bush and his crew had no idea what was going on. They had no clue how to fix it.

President Bush pushed through the first bailout through Congress. While many folks were trying to figure out how to get their lives back on track, the federal government was handing out money to the folks who brought the whole system crashing down. The public was outraged.

But this time things were different. There was little rage against the free market ideology that caused the entire pyramid to collapse. What we saw instead was the rise of a protest movement of folks who called for even less government involvement in the economy. It was the great Republican reawakening. A movement that defied logic.

In his latest book, Pity the Billionaire: The Hard-Times Swindle and the Unlikely Comeback of the Right, Thomas Frank takes an in-depth look at how the New(est) Right created a protest movement in favor of even more laissez-faire economic policy.

Mr. Frank also has harsh words for President Obama and the Democrats. Once upon a time the Democratic Party was the party of the working class and the disenfranchised. That all changed in the 1980's when moderates and conservatives took over the party and got into bed with Wall Street. Without an effective check, the free marketeers led the country to the edge of the cliff and into the sea below.

The New(est) Right has, without a doubt, pulled off the biggest swindle in history.
Posted by Paul B. Kennedy at 8:00 AM