Making your bed and sleeping in it 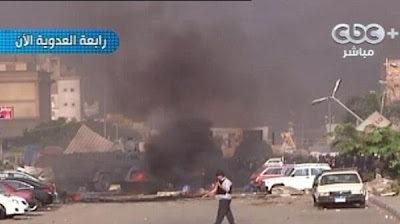 Oh, be so careful what you wish for. Millions cheered when Muhammed Morsi was deposed last month in Egypt. No, he was no friend of democracy. But, what can you expect when the country has never known anything but authoritarian rule?

Mr. Morsi somehow believed that his election gave the Muslim Brotherhood the authority to impose an Islamic state on the people of Egypt. Never mind that he won with barely a majority of the voters. He took his win and did his best to ram his party's theocratic ideology down the throats of the people.

He seemed to forget that the revolution that toppled Hosni Mubarak wasn't the work of the Muslim Brotherhood. It was the work of the masses who were willing to stand up and risk their lives to overthrow a dictator.

After the fall of Mubarak it was the Muslim Brotherhood who was in the best position to take advantage of the power vacuum, having been an organized - albeit banned - party from the better part of the 20th century. They had the infrastructure, and the money, to put together a winning slate of candidates.

What they didn't have was the ability to compromise and to work with others in forming a coalition to develop democracy in Egypt. For Mr. Morsi and the Brotherhood, it was their way or the highway. And it was this attitude that brought about the crisis that resulted in a military coup in early July.

And make no mistake about it, it was a coup. The Obama administration can parse words and play games all they want - but when the military forces out a popularly elected president (no matter how much dissatisfaction their is with his rule), it is a coup.

Are they cheering now?

There are at least 281 more than 500 people who were killed by security forces today when the military-backed government made their decision to clamp down on dissent. What kind of a government turns its military on its citizens?

And, as I have asked before, what does this portend the next time a popularly elected president runs afoul of public opinion? What happens the next time the people gather together to demand that their voices are heard?

The government also imposed a month-long state of emergency. The purpose of the decree? To quell any and all dissent. How is this any different than life under the Mubarak regime? But I suppose that is a tricky question for those supporting the coup. So, come on , President Obama, explain the difference. Explain how the current situation is doing anything to advance democracy across Egypt. Or is this all about appeasing defense contractors who need markets to sell their tools of death and destruction?

I'm no fan of Muhammed Morsi. I'm no fan of anyone who wants to mix religion and politics. Could Mr. Morsi have handled his brief time in office better? There is no doubt about it. If he had been more interested in building a democratic Egypt than he was in deciding who folks could pray to, he would still be the nation's president. Had he been more concerned with improving the lot of the Egyptian people rather than telling them how to live their lives the nation wouldn't be under de facto military rule.

But that doesn't begin to excuse what has happened in Egypt over the past six weeks. And it doesn't being to excuse the shameful behavior of our government in the affair. The Obama administration has clearly demonstrated that our nation's supposed commitment to democracy and human rights is nothing more that empty words.

Never forget that what the military giveth by force of arms, the military taketh as well. Those who support the coup have made their deal with the devil and will have to live with the consequences for a long time. Or so long as they stay within the good graces of the military.
Posted by Paul B. Kennedy at 7:00 AM