On its way to the ash heap of history

For the second year in a row, the State of Texas murdered seven inmates. Last year marked the fewest executions in two decades, now that number has been duplicated.

But even though the number of executions has remained low for the past two years, Texas still led the nation in state-sponsored murder, outpacing the four killed in Arkansas. There have been a total of 30 executions across the country in 2017.

A number of factors account for this (encouraging) trend. The first is fewer people are being sentenced to die in Texas. That number has been dropping since Texas jurors were given the option of sentencing a defendant to life in prison without parole. 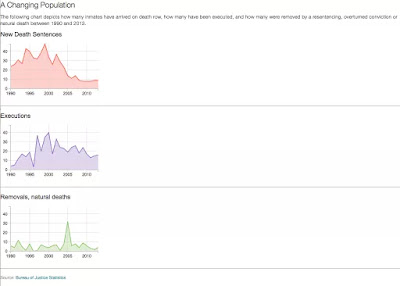 Legal challenges to the death penalty have also been more successful as the number of scheduled executions wanes. These challenges have ranged from attacks on junk science to the method of execution. Once drug suppliers began to restrict supplies of drugs needed in "lethal cocktails," states have had to draw up new drug protocols which have invited legal attack on Eighth Amendment grounds.

As the number of executions decreases, the population on death row has aged. Some inmates have "cheated" the executioner by dying in prison. 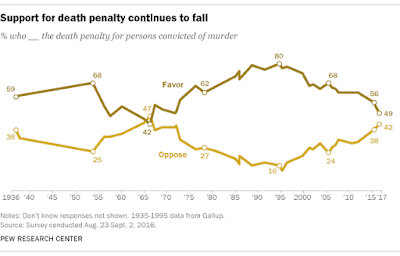 Bible thumpers, despite being told "thou shalt not kill," overwhelming support the right of the state to kill. And that, somehow, still makes them "pro-life" - whatever the hell that's supposed to mean.

Part of the reason behind this change of attitude has been the number of people sentenced to death who have been exonerated over the past dozen years or so. I think there is a growing realization that our trial process is flawed due to the sheer number of people who have been exonerated after having had a jury decide the state had proven its case beyond a reasonable doubt.

And that realization is what is most likely to kill off the death penalty in this country. The sheer number of exonerees tells us that innocent men have been murdered by the state in the past. And for a country that claims to follow the rule of law, one is too many.

As much as I would love to see the death penalty outlawed across the United States, I don't think that's likely to happen in the foreseeable future. However, I do think that the death penalty will go away on its own accord in my lifetime. It will be done away with by junk science, prosecutorial misconduct, lack of drugs and a growing belief that life without parole is more humane.
Posted by Paul B. Kennedy at 8:00 AM