Book review: The Cadaver King and the Country Dentist

I just finished an excellent book from Radley Balko and Tucker Carrington Sunday night as the storm raged around us. And by excellent I, of course, mean a book that got me so angry I wanted to hurl my phone across the room. The book is The Cadaver King and the The Country Dentist. 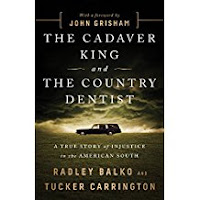 While the book focuses on Steven Hayne and Mark West, the book serves as a warning to all those out there who think judges in criminal courts are doing a good job of keeping junk science out of the courtroom. If you represent plaintiffs with claims against insurance companies and large corporations, then the judges act as stern gatekeepers of scientific evidence - doing all they can to exclude any scientific evidence that might cause someone to have to write a big check. But, when the actual lives of people are at stake, judges are only too willing to allow in any junk science sponsored by the State. Any problems with the testing or methodology, of course, goes to the weight of the evidence and not its admissibility.

Mr. Hayne was a forensic pathologist - at least that's what he called himself. Coroners throughout Mississippi were only too happy to farm out autopsies to him since he would do everything in his power to bend his findings to confirm what the police believed. By his own admission he would perform up to five autopsies a day - day after day after day. He gave expert opinions in fields in which he had no formal training or certification. And even after he was discredited, Mississippi prosecutors and the Attorney General still defended his opinions against attack on appeal.

Mr. West was a local dentist who passed himself off, with the help of compliant judges across the state, as an expert in multiple fields including bite mark analysis, tool mark comparison as well as others. Even after being caught on film jamming casts of mouths onto the skin of deceased victims, judges continued to allow him to testify.

Thanks to the testimony of these two, as well as the win-at-all-costs mentality of small town prosecutors, Mr. Hayne and Mr. West were responsible for sending two innocent men to death row -- Levon Brooks and Kennedy Brewer. And then, even after the evidence that convicted the men was discredited, prosecutors fought like hell to keep the two men behind bars.

One point the authors emphasize in the closing chapter of the book is something that we as trial lawyers need to sit down and digest. According to the US Supreme Court's Daubert ruling, scientific evidence can be admitted to court if the court finds the science is generally accepted. But what makes a field of scientific inquiry "generally accepted?" In the legal field we are looking for answers right now, but science isn't concerned with a timeline. Science is concerned with getting it right - regardless of how long the process takes. Just because some piece of scientific evidence is deemed to be generally accepted now, a few years down the road we may learn that the entire inquiry was flawed. What happens to those men and women sitting in prison based upon that evidence? And at what point does a field of inquiry cease to be generally accepted? Is it when the first critical analysis is published? The second? And how are we - and more importantly, our clients, to know?

The other big issue they touch on is the very nature of forensic science. Unlike so-called "pure science," forensic science is developed specifically for use in the legal system. There's no rigor of peer review. Frequently articles are published in magazines aimed at law enforcement or others in that field of inquiry in journals that don't require articles to be peer-reviewed. Is it no wonder, then, that fields of inquiry such as bullet composition, bite mark analysis, blood spatter analysis, tool mark identification and others have been shown to be nothing more than junk science?
Posted by Paul B. Kennedy at 8:00 AM

Radley books & articles are very well researched. He is a good role model for lawyers & journalists.